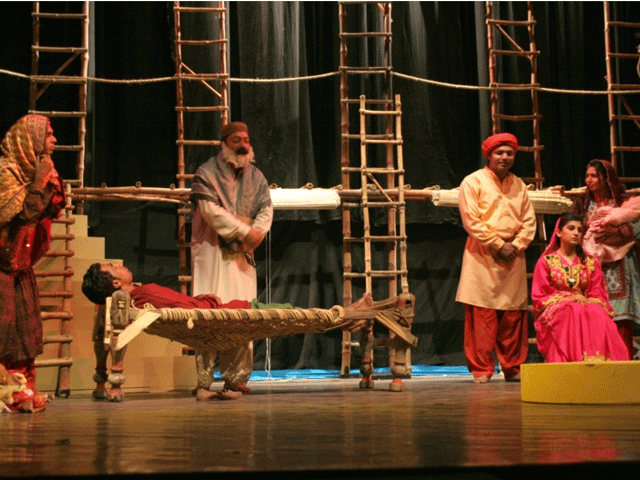 LAHORE: Despite bleak prospects for theatre in Pakistan and a pressing financial situation, Ajoka Theatre seems more than determined to preserve arts and culture within the country.

According to founding member and director/actor Madeeha Gohar, Ajoka Theatre has had a long list of national and international performance venues throughout 2016. “We did plays in Larkana recently and Hyderabad too,” Gohar told The Express Tribune. “Actually, this whole year has been busy for us. We have performed in India and Denmark, as well as conducted theater workshops in Quetta, Faisalabad and Lahore.”

Gohar went on to share details from her recent trip to Denmark, wherein she and her fellow troupers performed Ajoka Theatre’s popular play Bulha. “The chief guests at the event included the Danish ambassador to Pakistan Ole Thonke and Mansoor Junejo, the Pakistani ambassador to Denmark,” Gohar revealed. “Our performance was very well-received, not just by the public but Mr Thonke as well, who praised Ajoka’s efforts and talent. He was especially touched by the message of Bulha which is still relevant today, although the play was written 300 years ago.” Apart from this, Ajoka musicians also performed qawwali at the World Cultural Centre in Copenhagen.

Before coming to Sindh, Ajoka Theatre will be showcasing a play called Dukh Darya in Lahore to share the true story of a young Kashmiri girl who tried to take her own life for not being able to conceive. “She jumped in the river to commit suicide but survived, ended up crossing over to the Indian side and was arrested there. Ironically, she was raped and eventually, gave birth to a baby girl there,” said Gohar.

As per the actor, The Pakistani High Commission did try to bring this girl back to Pakistan but the government refused to accept her baby for she had been born in India. “She did manage to come back ultimately but the girl has now passed away. My husband and I met her family some time ago and that’s why, we’ve recreated her story in the play.”

Despite a serious illness earlier this year, Gohar – along with her team – has been working hard to spread positivity and a softer image of Pakistan. “This year, we invited a number of guests from the UK, India and other countries to see our performances and share their experiences with us. We also tried to perform in Khyber Pakhtunkhwa (K-P) but the government did not allow us due to security concerns,” she stated. “However, I truly believe that art and cultural activities like theatre can create happiness, eliminate extremism and the government ought to take it more seriously.”

Gohar is, nonetheless, satisfied with what she did manage to check off her to-do list for the year. “Apart from everything we did in Pakistan, Ajoka has done well in 2016,” she said. “Fortunately, I am in good health now and the reason for that is my passion for theatre; that I continued working even when I was not well. All the performances and training workshops Ajoka Theatre conducted this year really helped stabilise me during my illness.”

4 tips for the perfect barbecue