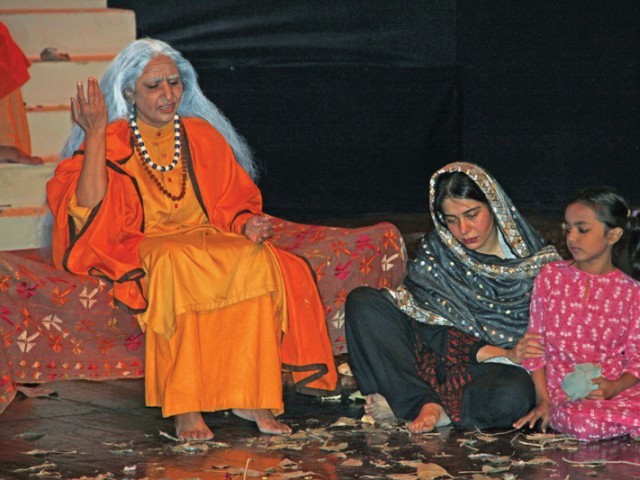 ISLAMABAD: “The child can go but the mother can’t? What kind of rule is that?” a flabbergasted Shehnaz asks three Pakistani officials at the border with India in Kashmir. The partition means that her young daughter born in India can go visit her family in Jammu but she can’t unless she gets a visa.

They warn her that proceeding towards Indian Occupied Kashmir may result in arrest or worse. She however persists.

This was the setting and premise of Ajoka Theatre’s play ‘Dukh Darya’ (The River of Sorrow) performed in the auditorium of the Pakistan National Council of Arts (Pnca) earlier this week.

The play was among a series of three plays which the theatre group performed in the capital on December 13, 14 and 15.

Dukh Darya, written by playwright Shahid Nadeem and directed by Ajoka’s director Madeeha Gauhar, is based on the true story of a Kashmiri woman who was arrested in Indian Occupied Jammu as she tried to visit her relatives there.

Hundreds of people and families have crossed the border between the disputed territories inadvertently, and as a result have had to suffer –  enduring long detentions, arrests, harassment to even getting separated from their families. The play also raised questions on status of women in the region.

The theatre group also presented one of its latest and contentious plays, Kabira Khara Bazar Mein on Wednesday. 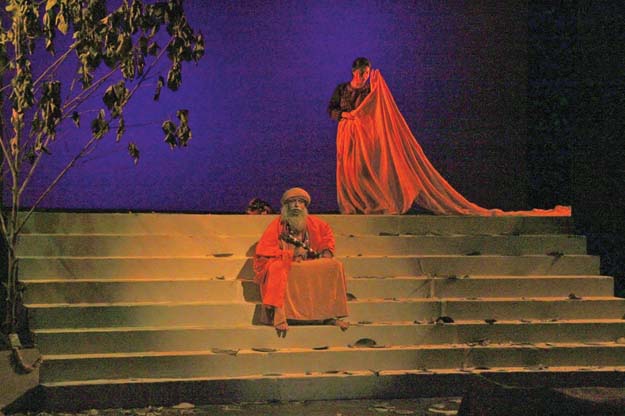 Based on Bhisham Shani’s (who was born in Rawalpindi and later studied at the Government College in Lahore before moving to India) famous play and designed and directed by one of India’s prominent theatre directors Kewal Dhaliwal. He was assisted by Ajoka’s Nirvaan Nadeem.

The play traces the life and message of the influential mystic Bhagat Kabir, the 15th century poet-saint with songs of Kabir. Like the message in his poetry and songs, the play portrayed the life of Kabir and how he advocated religious harmony and tolerance and rejected religious hatred and discrimination.

Kabir was best known for the Bhakti movement, which was a largely monotheistic spiritual and social movement which challenged the Hindu caste system and projected a relationship with the creator based on love and compassion.

The movement profoundly influenced later Sufis poets and mystics such as Bulleh Shah.

On Thursday, Ajoka will stage Bala King, a Punjabi adaptation by Shahid Nadeem of a  Bertlot Brecht’s play written “The Resistable Rise of Arturo Ui”.

With allegorical reference to the rise of Hitler, the play traces the rise of a petty criminal in Lahore to political prominence.

It is a strong indictment of the use of bribe and intimidation in politics.