The produc­tion titled Life on the Line is slated to releas­e next year
By Adnan Lodhi
Published: November 16, 2016
Tweet Email 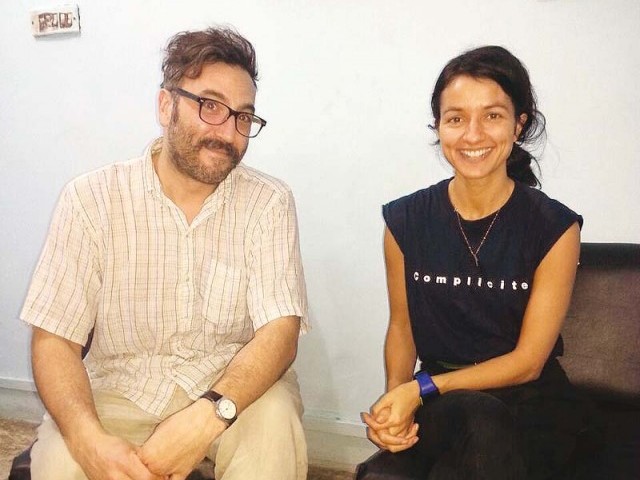 Mrs Dina Mouswai and Mr Ryan Van Winkle are visiting Lahore for the pre-production of their collaboration play. PHOTO: PUBLICITY

LAHORE: In the midst of multiple clashes between Pakistan and India over the many years, Ajoka Theatre has frequently collaborated with artists across the border. As the relationship between the two countries has hit the ceiling, it has taken a toll on Ajoka’s mastermind Madeeha Gohar and her team’s willingness to work with artists there. However, it hasn’t killed their flair for collaboration and exchanges as the theatre troupe has decided to join forces with a UK-based duo for their upcoming production.

Mrs Dina Mouswai and Mr Ryan Van Winkle are visiting Lahore for the pre-production of the collaborative play. The former is a director at the Compucite Theater Company in the UK, and Winkle is a producer at Highlight Arts. While both drama enthusiasts are extremely happy and excited to join forces with Ajoka, the message they aim to convey through the play is far from such light-hearted emotions. Highlighting the issue of Death Penalty in Pakistan, the production titled Life on the Line is slated to release next year.

They are heading meetings with victims of death penalty who have been sentenced to jail. “Theatre is the best way to deliver an important social message. The issue of death penalty is considered a serious problem all around the world. It issue becomes critical for underprivileged people who are given death penalty for the wrong reasons. It will also shed light on the judiciary system in Pakistan,” Mouswai tells The Express Tribune. The play will be staged in Lahore, Islamabad and Karachi. “Ajoka’s identity is the fact that it has always raised a voice against evils in society and this is why we decided to work with the group. We expect a great response,” says Winkle.

Both Mouswai and Winkle have been conducting training workshops for local theatre artists who will be shortlisted to perform in the play. “We are amazed at the amount of young talented artists in Pakistan. There is barely any proper theatre and art education in Pakistani schools but these children are doing a wonderful job. They have the energy and expertise in all genres of acting and during the initial workshops, I was actually learning more from them,” quips Winkle. Besides working on the play, the duo has been touring historical places in Lahore, attending music programmes and watching films to get a taste of Pakistani talent.

Winkle reveals Life on the Line will also be staged in the UK. “We are searching for resources to take the play to the UK but we are very hopeful about this. People in the UK are aware of Gohar’s contributions and efforts to Pakistani theatre. This is why we decided to team with her, and I am confident it will be a beautiful play and appreciated by our (UK) audiences as well.” Stating the major issue is lack of funds, Winkle mentions that if this is resolved, they will stage the play in the UK soon after its release in Pakistan.