Putin, who has said he knew Karlov person­ally, has posthu­mously given Karlov the Hero of Russia award
By Reuters
Published: December 22, 2016
Tweet Email 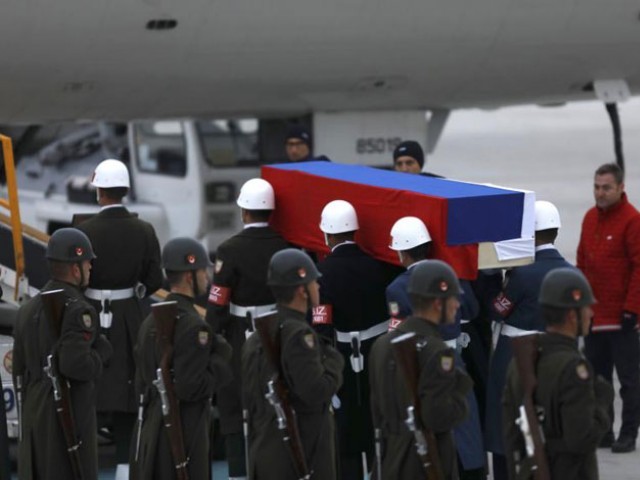 Russia staged a somber memorial ceremony on Thursday for Andrei Karlov, the Russian ambassador to Turkey gunned down in Ankara on Monday by a man shouting “Allahu Akbar” and “Don’t forget Aleppo”.

Russia and Turkey have branded the assassination a failed attempt to derail a rapprochement between Moscow and Ankara which has seen them cooperate more closely over Syria, where they have backed different sides in the conflict.

Diplomats and family members gathered at the Russian Foreign Ministry, a looming Stalin-era skyscraper in central Moscow, to bid farewell to Karlov, who was 62.

Lavrov said Karlov had been murdered on the front line and had been the victim of “a despicable terrorist act”.

President Vladimir Putin also paid his respects, briefly sitting beside the coffin and speaking to Karlov’s widow, who wore a black veil.

Karlov was a Soviet-trained diplomat who worked in North and South Korea during the 1990s and 2000s and was sent to Turkey in 2013.

His name was etched into a slab of pink marble on the wall of the Foreign Ministry along with the names of Russia’s most illustrious diplomats.

Proceedings will move to Moscow’s gold-domed Christ the Saviour Cathedral later on Thursday where the head of the Russian Orthodox Church will lead a ceremony.

Putin, who has said he knew Karlov personally, has posthumously given Karlov the Hero of Russia award, the country’s highest military medal. “We must know who directed the killer’s hand,” Putin said after the murder, promising retribution.

Turkish authorities have identified the assassin as Mevlut Mert Altintas, 22, who had worked for Ankara’s riot police.

President Tayyip Erdogan has blamed the killing on the network of Muslim cleric Fethullah Gulen, something Gulen denies. The Kremlin however has said it is too early to say who stood behind the murder.

Russia has flown a team of investigators to Turkey to help with the investigation.