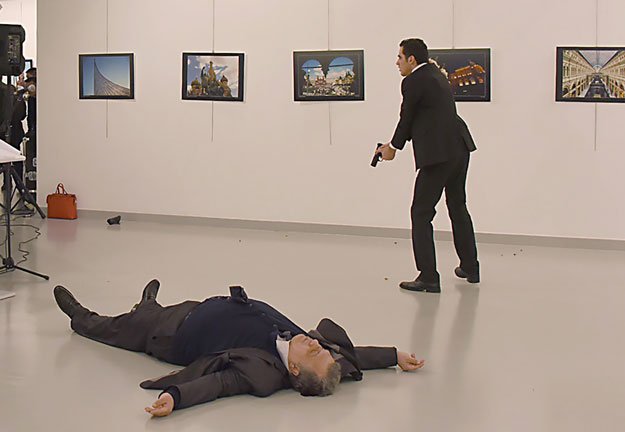 ANKARA: A Turkish policeman crying ‘Aleppo’ and ‘Allahu Akbar’ shot dead Russia’s ambassador to Turkey at an art exhibition in Ankara on Monday, in what Moscow termed a ‘terrorist act’.

Andrei Karlov died of his wounds after the shooting, which occurred on the eve of a key meeting between the Russian, Turkish and Iranian foreign ministers on the Syria conflict.

Dramatic television footage showed the man — dressed in a dark suit, white shirt and tie — waving a gun and gesturing in the air at the Ankara exhibition hall where the veteran diplomat was opening a show of Russian photographs.

The state-run Anadolu news agency said the gunman had been ‘neutralised’ in a police operation inside the hall after 15 minutes of clashes.

“Today in Ankara as a result of an attack the Russian ambassador to Turkey Andrei Karlov received wounds that he died from,” Russian foreign ministry spokeswoman Maria Zakharova said in televised comments.

“We qualify what happened as a terrorist act,” she added. “The murderers will be punished.

“Today this issue will be raised at the UN Security Council. Terrorism will not win out,” she added.

Ankara Mayor Melih Gokcek identified the attacker as a Turkish policeman. The Yeni Safak daily said on its website that the attacker — named as M M A  — worked with anti-riot police in Ankara.

The shooting took place at the Cagdas Sanatlar Merkezi, a major art exhibition hall in the Cankaya district of Ankara where most foreign embassies are located including Russia’s mission.

“It happened during the opening of an exhibition,” Hurriyet correspondent Hasim Kilic, who was at the scene, told AFP.

“When the ambassador was delivering a speech, a tall man wearing a suit, fired into the air first and then took aim at the ambassador,” said Kilic.

“He said something about Aleppo and ‘revenge’. He ordered the civilians to leave the room. When people were fleeing, he fired again,” he added.

Images showed the ambassador standing up to speak at a lectern at the opening of an photo exhibition called “Russia from Kaliningrad to Kamchatka” showing images from Russia’s far west to its far east.

He stumbles and then crashes to the ground after being shot, lying flat on his back as the besuited attacker brandishes the gun at terrified onlookers.

The man shouts “Allahu Akbar” (“God is greatest”) and then talks about pledging allegiance to jihad in Arabic, the images showed.

Pakistan condemned the killing of the Russian ambassador in the terrorist attack.