Brothe­r of Raymon­d Davis victim says he is open to exchan­ging US citize­n for Dr Aafia.
Published: March 1, 2011
Tweet Email 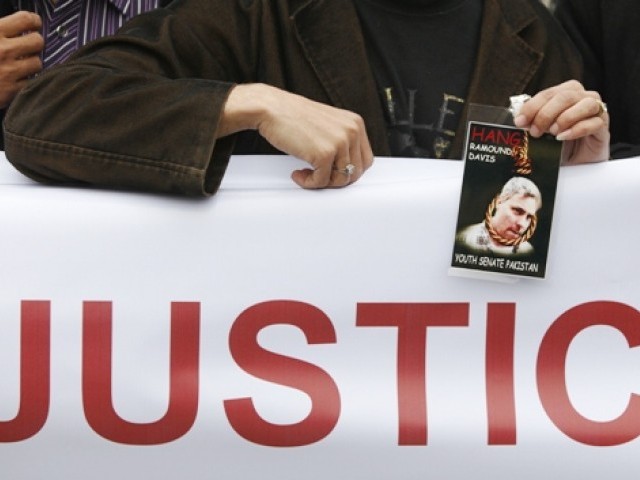 A man holds an image of U.S. national Raymond Davis while chanting slogans during a rally against Davis in Islamabad February 28, 2011. PHOTO: REUTERS

Family members of one of Raymond Davis’ victims, Faheem, said they are open to exchanging Davis for Dr Aafia Siddiqui.

Faheem’s family, including his brother Waseem, father and uncle, were addressing the media at the residence of Siddiqui’s sister Dr Fauzia’s residence in Karachi. They had arrived in the city to meet with Siddiqui’s family.

Faheem and Faizan, killed by Davis in Lahore, were neither robbers nor had any criminal record, said Waseem while addressing the media. The weapons had been planted on them later to implicate them, he asserted.

Before the Americans can even talk about repatriating Davis, they need to release Aafia, said Dr Fauzia.

Meanwhile, Siddiqui’s mother added that it was the right of the families of Davis’ victims to ask for monetary compensation or demand Siddiqui’s release.

Faheem’s family, however, said they would resist pressure by the US and Pakistan government to accept blood money as compensation.

The supporters chanted slogans against Davis and demanded he be hanged.

The government’s efforts to release Davis will be resisted at every level, said Pasban president Altaf Shakoor while addressing the gathering at the airport. He condemned the US authorities for ‘falsifying facts to get the killer released.’