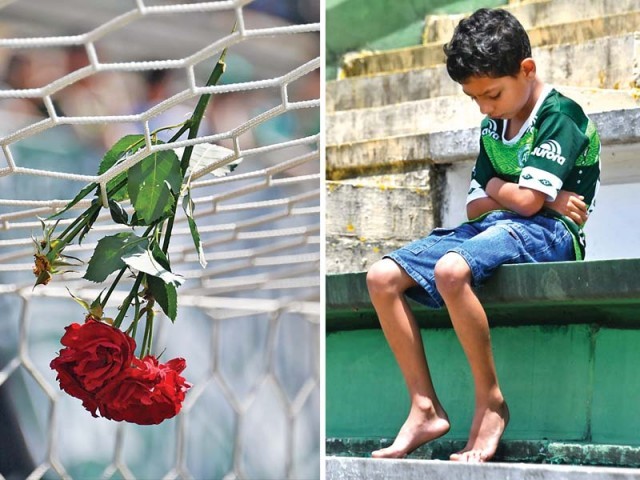 The loss of almost the entire Chapecoense side has been understandably met with shock and grief by lovers of football across the globe. PHOTOS: AFP

LA UNIóN: A plane that crashed in the mountains of Colombia, killing 71 people, including members of a Brazilian football team, may have run out of fuel, a Colombian military source told AFP.

“It is very suspicious that despite the impact there was no explosion. That reinforces the theory of the lack of fuel,” said the source on Tuesday.

The disaster virtually wiped out an up-and-coming Brazilian football team and sent shock waves through the world of football.

Football legends Pele and Maradona as well as current superstars Lionel Messi and Cristiano Ronaldo led tributes to the players of Chapecoense Real, a humble team whose march to glory was cut abruptly short.

Having risen only recently from obscurity, the team was on its way to play in the finals of the Copa Sudamericana, South America’s second-biggest club tournament, when disaster struck.

“The pain is terrible. Just as we had made it, I will not say to the top, but to have national prominence, a tragedy like this happens,” club vice-president Ivan Tozzo told Globo SporTV. “It is very difficult, a very great tragedy.”

The dead included most of the team and 20 Brazilian journalists travelling to cover the match.

The six survivors are being treated in hospital. “I have just seen the plane and given the state it is in, it is a miracle that six people survived,” said Governor Luis Perez of Antioquia department, where the plane went down.

One survivor, goalkeeper Jackson Follmann, had to have his right leg amputated, said the San Vicente Foundation Hospital outside Medellin. It reported he was “stabilising” in intensive care.

Crying, the head of the club’s advisory council Plinio Filho recalled the players telling him they were off to “chase a dream” as they left.

“The group was like a family. It was a group of friends, where everyone laughed a lot, even in defeat,” he said.

Footage of the club on board the plane before take-off aired on TV channel Gigavision in Bolivia, where the team departed from the city of Santa Cruz after taking a commercial flight from Brazil.

Coach Mauro Stumpf told the TV network he hoped the plane would “bring [us] luck” like it did when the team flew with the same company to a quarter-final match last month.

The Copa Sudamericana final first-leg had been scheduled for Wednesday against Atletico Nacional of Colombia.

In an emotional gesture, Nacional called for Chapecoense to be awarded the cup.