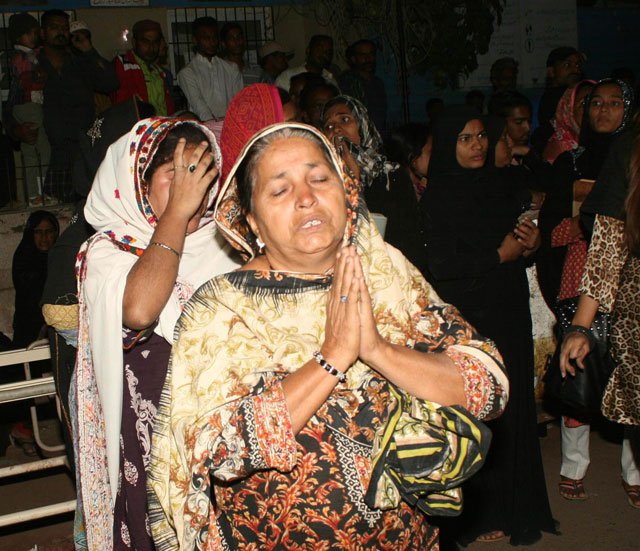 KARACHI: Why is it so important for VIPs to visit today? We haven’t been able to see our loved ones since the afternoon, lamented Waqar Ahmed from Korangi who anxiously waited to see his injured family members outside the Shaheed Mohtarma Benazir Bhutto Trauma Centre at Civil Hospital, Karachi.

One of my relatives passed away while some other relatives are being treated after being injured in this tragic incident, said Yasmeen Bibi from Orangi Town.

According to Bibi, her relatives went to visit the dargah in Khuzdar district on Friday; they go every month due to their strong belief in the teachings of Shah Noorani. She added that the saint had a strong following among the working class of Karachi, as they frequently visit his shrine, which is 250 kilometres from Karachi.

There was panic inside the hospital as people searched for their loved ones hours after the blast at the shrine. The deceased and injured were still being rushed to the hospital early Sunday morning. “My brother’s family has also gone to Noorani,” cried Shahid Abbasi, a panicked resident of Kashmir Colony. “It’s been an entire day since we were able to contact them, as their phones are not responding.”

On Saturday night, as ambulances brought the injured and deceased to Civil Hospital, Karachi, many people were overcome with grief. “It was a big blast; I can’t express how tragic it was. The bodies were blown to pieces,” wept a man who arrived at the facility with two corpses.

“My brother’s name is Qadeer. Please check whether he has been admitted in the hospital,” shouted another middle-aged man who lives in Azam Town repeatedly. Similar cries could be heard throughout the hospital, as people were desperate to locate their loved ones.

Asad Iqbal was in panic outside the hospital, where he cursed the perpetrators of the violence for killing his friends. “We can’t expect better from these people who kill others for their personal gain,” he spat angrily.

According to the assistant medical superintendent of Civil Hospital, Karachi, Dr Abdul Qadir Siddiqui, 36 bodies were brought to the hospital. He said that all but two of the bodies have been handed over to the heirs of the deceased as the two remaining corpses were burnt beyond recognition.

Dr Siddiqui explained that 43 wounded were brought to the hospital, of which 20 have been discharged after their condition was stabilised. He added that some of the injured are in critical condition due to blood loss.

Dr Seemin Jamali, in-charge of the accidents and emergency ward at Jinnah Postgraduate Medical Centre (JPMC), said that 11 people injured in the Noorani blast were brought to JPMC, out of which 10 have been discharged. One patient, Shahana Wakeel, has been admitted to the surgery ward.

Two injured patients were also brought to Abbasi Shaheed Hospital and have also been discharged.

As of Saturday afternoon, all three government hospitals have been on high alert. However, the majority of the patients were being taken to Civil hospital.

Attendants were even not allowed to enter the trauma centre.