Cadet Hikmat­ullah says terror­ists entere­d the rooms one by one, firing inside each room then moving to the other
By AFP
Published: October 25, 2016
Tweet Email 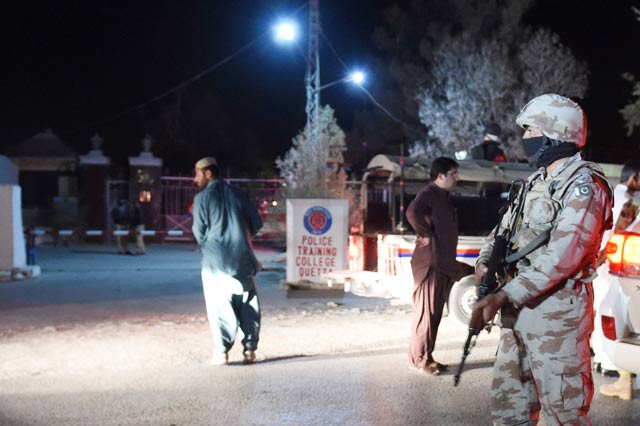 At least 60 people were killed after three gunmen burst into the sprawling academy, targeting sleeping quarters for some 700 recruits in the deadliest attack on a security installation in the country’s history.

Quetta college carnage: It’s nothing else but tit for tat

Young cadets who fled the gun and suicide bomb assault told of their terror as citizens from the provincial capital of Quetta, around 20 kilometres from the Balochistan Police College where the violence unfolded, meanwhile rushed to donate blood.

Speaking from his hospital bed where he was recovering from a bullet wound to his left shoulder, cadet Hikmatullah, aged 22, told AFP: “They entered the rooms one by one. They went in one room and fired inside it, then they went in another.

“They also knocked at the locked rooms and told the cadets that they were from the army, and when the opened the doors, they fired at them. They came in by jumping over the walls of the academy which are very small. I ran away from my room and was hit by a bullet, I still managed to flee.”

Witnesses recounted the men were dressed in camouflage and had covered their faces, but could not say for certain whether they had disguised themselves in military uniforms.

Zubair Ahmed another recruit, said: “We were sitting in a group of three or four people relaxing at around 10:15pm in the night and thinking of going to bed. “Suddenly there was firing and people started running around, screaming, there was chaos. Some people were jumping out of windows, others were trying to climb out onto trees.

“I also jumped out of a window via a tree and injured my shoulder and foot. I lay on the ground injured for one hour till I was rescued.”

The compound remained sealed to journalists but mobile video footage shot by an intelligence official showed the hollowed remains of a large dormitory hall covered in thick black soot. All the bedding and belongings in the room had apparently burnt and been reduced to ashes, while a deep crater in the floor showed where one of the three attackers had detonated his suicide vest.

The attack was the third biggest in Pakistan this year and a grim reminder that for all its gains in its long battle against insurgency, militants are still able to strike serious blows against top state institutions.

“So many young men, light of their parents’ eyes, hope for old age and future, snuffed out in the prime of their lives #Quetta #RIP”, tweeted writer Beena Sarwar, while others turned their ire on the government for failing to do enough to crackdown on militant ideology.