Unrest sweeps through the Middle East

Unrest sweeps through the Middle East 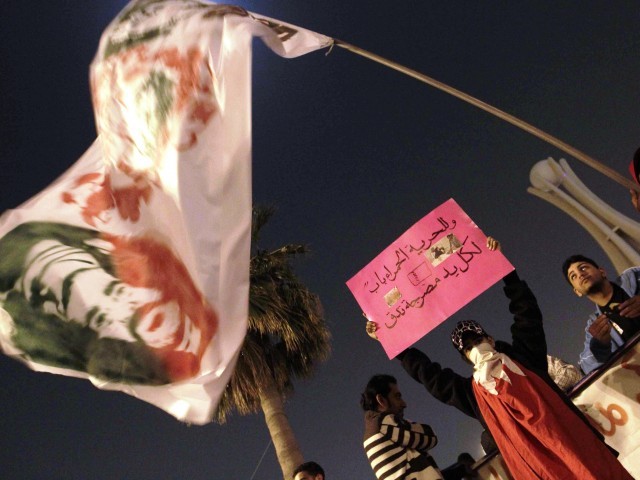 Bahraini anti-government protester holds a sign saying that freedom comes at a bloody price at Pearl Square in Manama on February 16, 2011. PHOTO: AFP

A secret report ordered by President Barack Obama last August concluded that without sweeping political changes the Arab world was ripe for popular revolts and identified Egypt as a likely flashpoint, the New York Times reported, citing administration officials who spoke on condition of anonymity.

The two spy chiefs acknowledged US agencies offered little if any advance warning when unrest erupted in Tunisia in January. But Clapper, who supervises 16 frontline spy agencies and serves as President Barack Obama’s chief intelligence adviser, pointed to the limits of spycraft. “We’re not like Sherman Williams paint. We don’t cover the earth equally. So frankly Tunisia was probably not up there on our top 10 countries that we were watching closely,” Clapper said. “Obviously we are going to work on that.”

They also solicited proposals for how the administration could push for political change in countries with autocratic rulers who are also valuable allies of the United States.

As unrest spread through the Middle East and Arab regions, police in the Gulf island kingdom of Bahrain attacked demonstrators camped out in the capital on Thursday, killing three, in a move to stifle pro-democracy protests inspired by similar movements across the Middle East.

“They are killing us!” one man told Reuters as police firing teargas and buckshot moved on Pearl Square in Manama around 3am, dispersing some 2,000 people, including women and children, who had spent three days there in emulation of the successful protest camp on Cairo’s Tahrir Square.

Having seen protests in Tunisia and Egypt gradually build momentum and topple veteran rulers there, Bahrain’s Saudi-allied royal family, long aware of simmering discontent, seem to have decided to nip in the bud the latest challenge to their rule.

The overnight bloodshed in Bahrain came as Libyans were preparing to mount a “Day of Rage” against their entrenched authoritarian ruler Muammar Gaddafi. There was little sign early on Thursday that a social media campaign to get Libyans onto the streets had had much of a response in the tightly controlled North African nation, where Gaddafi, like the now deposed presidents Hosni Mubarak of Egypt and Zine al-Abidine Ben Ali of Tunisia, has ruled for decades.

Hundreds of Yemen government loyalists wielding batons and daggers chased off a small group of protesters trying to kick off a seventh day of rallies on Thursday to demand their president end his 32-year rule.

Police lost control of the crowd of government loyalists trying to attack around 100 anti-government protesters meeting at Sanaa University. But as the demonstrators fled, police were able to prevent loyalists from chasing them down sidestreets.

President Ali Abdullah Saleh is a US ally against a resurgent al Qaeda wing that has launched attacks on foreign and regional targets from Yemen, a failing state that is one of the Arab world’s poorest countries.

Yemen, where a third of the population faces chronic hunger and 40 per cent live on less than $2 a day, is also struggling to cement a truce with north Shi’ite rebels in the north and stifle an increasingly violent southern separatist movement.

He may prove harder to topple than Egyptian President Hosni Mubarak, said Khaled Fattah, a Yemen scholar at Scotland’s St. Andrews University, contrasting the centralisation of state power in Egypt with the fragmented nature of authority in Yemen.

Yemen lacks Egypt’s big urban middle class, with about 70 per cent of its 23 million people still living in rural areas.

“The continuity of protests, however, may put pressure on Saleh’s government to offer more political concessions to the southern (secessionist) movement. Such concessions might lead to the adoption of a federal system,” Fattah added.

Saleh, trying to calm three weeks of protests, has made concessions such as a promise to step down when his term ends in 2013 and a vow not to let his son inherit power. Since the opposition coalition accepted Saleh’s offer of national dialogue a week ago, spontaneous anti-Saleh protests have broken out. But they are smaller than the opposition-led rallies that which at their peak drew tens of thousands.

Recent demonstrations, organised by text messaging and Facebook, rather than any political party, have been countered by pro-government crowds ready to use violence. One protester was killed in the southern port city of Aden on Wednesday, when police fired to disperse a demonstration, the first confirmed death since the unrest began.

Recent days have also seen trouble on the streets of Iraq and in non-Arab Iran too. Leaders from the Gulf in the east to the Atlantic in the West have been looking at a variety of measures to ease economic hardships that include rising food prices and unemployment among the young, as well as tightening security.

In Iran, supporters and opponents of the hardline Islamic system clashed in Tehran on Wednesday during a funeral procession for a student shot in a rally two days earlier, state broadcaster IRIB reported. Monday’s rally, in support of the people of Egypt and Tunisia, was biggest unrest since 2009.

In Iraq, three people were killed and dozens wounded in the southern city of Kut on Wednesday as protesters demanding better services fought with police and set buildings ablaze.