The Tunisia-Egypt shock wave rumbles on

The Tunisia-Egypt shock wave rumbles on 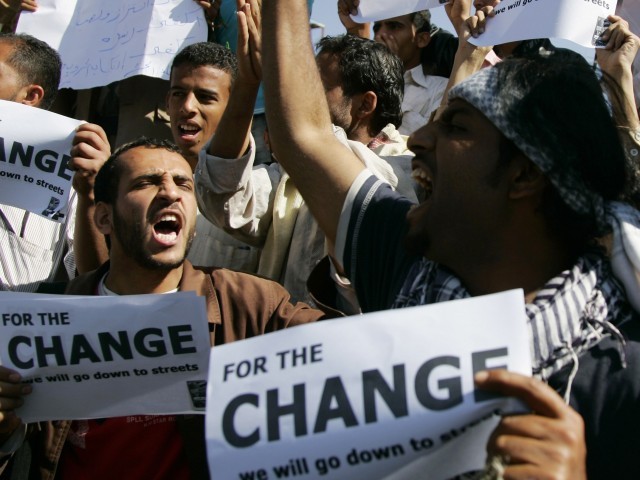 Anti-government protesters clashed with police trying to prevent them from marching towards Yemen's presidential palace in Sanaa on Sunday. PHOTO: REUTERS

NICOSIA: Shock waves from the ouster of presidents in Tunisia and Egypt continued to roll across North Africa and the Middle East on Monday, with peoples long subject to autocratic rule demanding to be heard.

Despite many states cautiously welcoming the overthrow of Zine El Abidine Ben Ali and Hosni Mubarak, their own populations have been seized by the momentum and are demanding greater freedoms and reform.

Following is a breakdown of events, both current and planned, in the Arabic-speaking world and in Iran.

France called on Algiers to allow anti-government protests, inspired by uprisings in Egypt and Tunisia, to take place freely and without violence.

Bahraini police used tear gas to disperse hundreds of protesters in several villages of the restive Shiite Muslim majority in clashes that wounded at least one person following Facebook calls for a February 14 “revolt.”

The new military regime called on workers to end a wave of strikes and civil disobedience that has threatened to paralyse the country in the wake of the fall of the Mubarak government.

Thousands of defiant Iranian opposition supporters in Tehran staged what they said was a rally supporting Arab revolts as riot police fired tear gas and paint balls to disperse them, witnesses and opposition websites said.

Baghdad will on March 29 host its first annual Arab summit since the US-led of invasion of 2003, in the wake of popular uprisings that transformed the political landscape of the volatile but long-time autocratic region.

Justice Minister Hussein Mujalli joined a sit-in held by trade unions and described a Jordanian soldier serving a life sentence for killing seven Israeli schoolgirls in 1997 as a “hero,” demanding his release.

Facebook groups numbering several hundred members have called for demonstrations to mark a “day of rage” in Libya on February 17 modelled on similar protests in other Arab countries.

Prime Minister Abbas El Fassi was to meet the opposition to discuss parliamentary polls, with the impact of the uprisings in Egypt and Tunisia weighing heavily on the talks.

Palestinian president Mahmud Abbas reappointed Salam Fayyad as premier and tasked him with forming a new government after his cabinet resigned.

Woman blogger Tal al-Mallouhi, 19, given five years in prison after being found guilty by a security court of “divulging information to a foreign country.” Her blog focuses on the Palestinians, not Syrian politics.

The European Union is to extend 258 million euros ($348 million) in aid to Tunisia by 2013 and 17 million euros immediately, to help cope with mounting social and economic tensions in the wake of Ben Ali’s ouster.

Pro-democracy protesters clashed violently with police and supporters of President Ali Abdullah Saleh, with clashes also reported in Taez south of the capital where thousands of people joined anti-Saleh demonstrations.