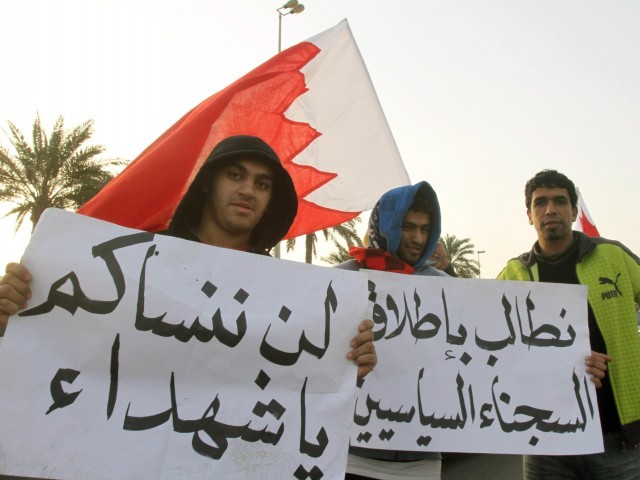 Bahraini protesters holds signs in Arabic that read, "We will not forget you oh martyrs" (L) and "We demand the release of political prisoners" (R) as they gather in Pearl Square (roundabout) in the capital Manama, on February 16, 2011. PHOTO: AFP

MANAMA: Thousands of Shi’ite demonstrators, inspired by popular revolts that toppled rulers in Tunisia and Egypt, gathered in Bahrain’s capital on Wednesday to mourn for a second protestor killed in clashes this week.

“We are requesting our rights in a peaceful way,” said Bakr Akil, a 20 year-old university student, wearing a sheet stained with red ink that he said was a symbol of his willingness to sacrifice his life for freedom. “I am optimistic that our big presence will achieve our demands,” Akil said.

Women dressed in black abayas followed the procession with their own chants calling for peace and Bahraini unity.

Elsewhere in central Manama, witnesses say about 2,000 protestors had spent the night in tents at Bahrain’s Pearl Roundabout, similar to the number marching on the streets a day earlier. It remains to be seen whether the number would rise or fall during Wednesday.

Some will have to return to work, after a public holiday on Tuesday to mark the Prophet Mohammed’s (pbuh) birthday. Police kept their distance, mostly confining themselves to a nearby dirt lot with dozens of SUV police vehicles.

The ministry of interior announced that all roads were open. The demonstrators from Bahrain’s Shi’ite majority say the ruling Sunni minority shuts them out of housing, healthcare and government jobs.

“The United States is very concerned by recent violence surrounding protests in Bahrain,” State Department spokesman PJ Crowley said in a statement. “We also call on all parties to exercise restraint and refrain from violence.”

The main Shi’ite opposition bloc Wefaq, which boycotted parliament to protest the clampdown by Sunni security forces, said it would hold talks with the government on Wednesday. Protesters said their main demand was the resignation of Prime Minister Sheikh Khalifa bin Salman al-Khalifa, who has governed the Gulf Arab state since its independence in 1971. An uncle of King Hamad bin Isa al-Khalifa, he is thought to own much land and is seen as a symbol of the wealth of the ruling family.

Activists say they also want the release of political prisoners, which the government has promised, and the creation of a new constitution. Poverty, high unemployment and alleged attempts by the state to grant citizenship to Sunni foreigners to change the demographic balance have intensified discontent among Bahrain’s Shi’ites.

Around half of the tiny island kingdom’s 1.3 million people are Bahraini, the rest being foreign workers. Analysts say large-scale unrest in Bahrain, home to the US Navy’s Fifth Fleet and a regional offshore banking centre, could embolden marginalised Shi’ites in nearby Saudi Arabia, the world’s biggest oil exporter.

King Hamad expressed his condolences for “the deaths of two of our dear sons” in a televised speech and said a committee would investigate the killings.

Bahrain, in a move appeared aimed at preventing Shi’ite discontent from boiling over, had offered cash payouts of around 1,000 dinars ($2,650) per family in the run-up to this week’s protests.

If captured, Bin Laden to be sent to Gitmo: CIA