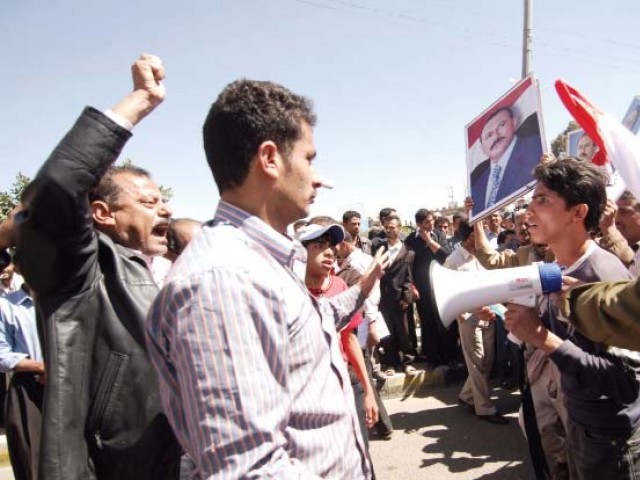 SANAA: Tensions from anti-government protests escalated in the two Gulf Arab states of Yemen and Bahrain on Tuesday.

Pro-regime supporters armed with batons and stones waded into a crowd of anti-government protesters trying to march on Yemen’s presidential palace, sparking clashes dispersed by police.

At least three people were injured as the rivals pelted each other with stones in the fourth straight day of protest in central Sanaa.

“The people want to oust the regime” they chanted, picking up the slogan used by demonstrators in Egypt.

As they advanced on Saleh’s palace, supporters of the president’s General People’s Congress armed with batons and stones confronted the demonstrators, who responded by hurling stones.

The president’s supporters notably tried to attack opposition MP Ahmed Saif Hashed, who took part in the protest, but he was protected by fellow marchers, witnesses said. Demonstrators said police sided with the pro-Saleh militants in dispersing the crowd.As tensions soared outside his palace, Saleh announced that his office was open “to listen to the views” of “various segments of society from all the republic’s provinces.”

In Manama, some 1,368 kilometres away from Sanaa, thousands of people marched through the streets after a man was killed in clashes between police and mourners at a funeral for a demonstrator shot dead at an earlier anti-government rally.

The death raised the prospect of further clashes between Bahrain’s Shia community and the security forces backed by the ruling Al Khalifa dynasty.