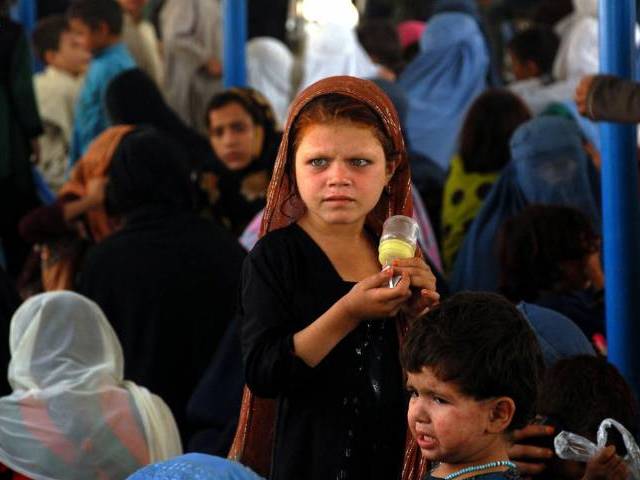 The UNHCR representative stated that he strongly believed that the most important issues for Afghan government was to prepare facilities and provide more peace and security in the country for the refugees who would like to return to Afghanistan. PHOTO: PPI

ISLAMABAD: More than 200,000 Afghan refugees have been repatriated from Pakistan this year, the UN High Commissioner  said on Tuesday. Nearly half of those Afghan men, women and children left in the month of September alone, the highest number since the US toppled the Taliban in 2002.

The outflow of refugees returning to the war-torn country comes after the government tightened its border controls in June and began cracking down on undocumented Afghans.

“From January until today, the number of refugees voluntarily repatriating to Afghanistan has crossed the figure of 200,000,” Afridi said.

More and more appear to be going every day, with officials saying that the first four days of October saw up to 5,000 returnees daily.

But UNHCR said the figure, based on its own data, was already out of date and should be revised to 1.4 million after the movement since July.

The agency also estimates that a further one million undocumented refugees are in Pakistan.

Meanwhile, UNHCR Representative in Pakistan Indrika Ratwatte said that Pakistan and Iran have been exemplary host of Afghan refugees for the last 37 years.

In an exclusive interview with IRNA, he said that at a time when many countries were closing doors on refugees Iran and Pakistan were still hosting millions of Afghan refugees and the hospitality was commendable.

Ratwatte said that there were three UNHCR refugee repatriation centres in Pakistan; two in Khyber-Pakhtunkhwa and one in Balochistan (almost near Afghanistan border) and these days, almost 5,000 Afghan refugees were leaving Pakistan for their homeland ‘per day’.

“According to International Organisation of Migrants so far 160,000 undocumented Afghan have also gone back this year,” he said.

He said that in Pakistan there were 1.4 million registered Afghan refugees whereas in Iran 900,000.

Pakistan among 10 countries that host half world’s refugees

“Iran and Pakistan are the largest refugee hosting countries till today and they have done that because of their Islamic values and because of the principles of hospitality and we should continue with those good traditions in a world where many countries are closing doors on refugees,” he said.

The UNHCR representative stated that he strongly believed that the most important issues for Afghan government was to prepare facilities and provide more peace and security in the country for the refugees who would like to return to Afghanistan.

He expressed hope that the government would give more time beyond the March 31st, 2017 deadline to Afghan refugees.