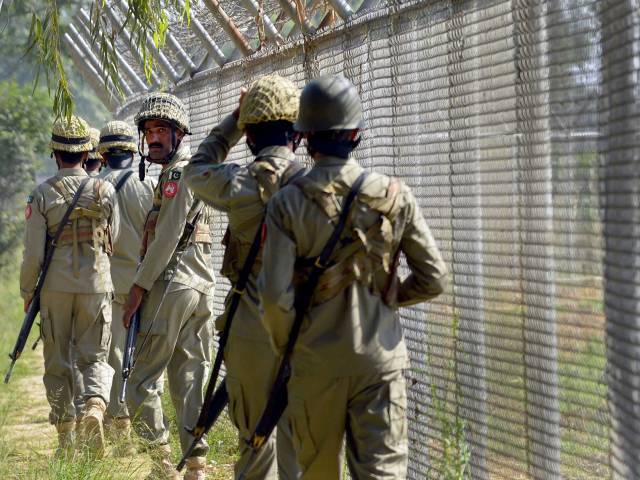 A file photo of Pakistan Army a the disputed Line of Control (LoC). PHOTO: AFP

At least two Pakistan Army soldiers were killed as Indian troops fired across the Line of Control in Azad Jammu and Kashmir, the Inter-Services Public Relations (ISPR) said on Thursday, dismissing the Indian claim of ‘surgical strikes.’

“India’s claims of surgical strikes are baseless,” DG ISPR Asim Bajwa said in a statement. “There has been no surgical strike by India, instead there had been cross border fire initiated and conducted by India.”

The military’s media wing added, “As per rules of engagement same was strongly and befittingly responded by Pakistani troops”.

The exchange of fire took place in the Bhimber, Hot Spring, Kel and Lipa sectors, and lasted about six hours early on Thursday, the military’s media wing said.

Bajwa said the notion of surgical strike linked to alleged terrorist bases is an illusion being deliberately generated by Indian to create false effects.

“This quest by Indian establishment to create media hype by re-branding cross-border fire as surgical strike is fabrication of truth,” the statement said. “Pakistan has made it clear that if there is a surgical strike on Pakistani soil, same will be strongly responded.”

India’s military had claimed it carried out “surgical strikes” along the de facto border with Pakistan in AJK to thwart a series of attacks being planned against major cities.

“Some terrorist teams had positioned themselves at launchpads along the Line of Control,” Lieutenant General Ranbir Singh, the army’s director-general of military operations, said in reference to the unofficial border in divided Kashmir.

“The Indian army conducted surgical strikes last night at these launchpads. Significant casualties have been caused to these terrorists and those who are trying to support them,” he told reporters in New Delhi, adding he had called his Pakistani counterpart to
inform him of the operation.

Defence Minister Khawaja Asif said Indian claims of surgical strikes were a lie, adding small firearms were used during the skirmish across the LoC and Pakistani forces responded in a befitting manner.

Updates on unprovoked & naked aggression of Indian forces that took place in the wee hours of last night… pic.twitter.com/KfgOf7MvKT

A statement from the Prime Minister’s Office said he “strongly condemned the unprovoked and naked aggression of Indian forces” and vowed the military was capable of thwarting “any evil design to undermine the sovereignty of Pakistan”.

The prime minister expressed satisfaction on the level of preparedness of the Pakistani armed forces to match any provocation by Indian army.

Meanwhile, Interior Minister Chaudhry Nisar Ali Khan also met with the prime minister and discussed the current security situation with him at length.

Chief of Army Staff General Raheel Sharif has said the entire Pakistani nation was proud of its valiant armed forces, which always stood behind the military in an event of a war.

The army chief expressed these remarks during a meeting with members of National Assembly’s Standing Committee on Defence Production at the military headquarters in Rawalpindi. “COAS General Raheel Sharif welcomed the parliamentarians to GHQ.

The prime minister has decided to convene a cabinet meeting on Friday to assess the deteriorating situation across the Line of Control (LoC) .

“PM Nawaz has decided to convene a cabinet meeting on Friday where deteriorating situation in the IOK will be the top agenda,” a statement issued by the prime minister’s office said.

In South Asia, water is thicker than blood

“Besides, PM will discuss the evolving situation after his UNGA visit and constructive bilateral meetings with heads of state/government, and the UN secretary general to consolidate the gains during the prime minister’s visit to New York.”

The prime minister has also called on Tuesday a meeting of National Security Committee with special invitation to all the chief ministers to deliberate at length the emerging scenario across the LoC and brutal oppression in IOK.

Nawaz also called a joint session of the Parliament to reaffirm the national resolve for safeguarding the sovereignty of the country, the statement added.

Following tensions, the United Nations has urged India and Pakistan to exercise restraint.

“The United Nations calls on the government of India and Pakistan to exercise restraint and encourage them to continue their efforts to resolve their differences peacefully and through dialogue,” said UN spokesperson Stephane Dujarric.

UN officials are following the increase in tensions in Kashmir “with great concern”, said Dujarric, adding that UN military observers were in contact with both sides to try to obtain further information.

‘Butcher of Kabul’ calls for peace as signs Afghan pact