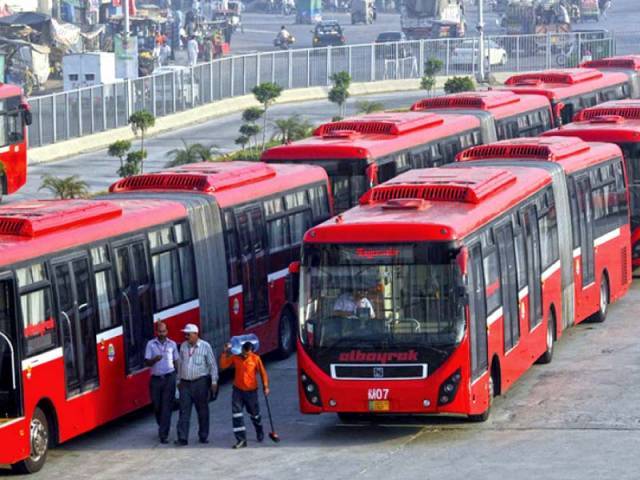 LAHORE: At least 200 new public buses have reached Karachi on Monday for the feeder routes of Lahore Metro Bus service.

Punjab Mass-transit Authority Operations General Manager Syed Uzair Shah told The Express Tribune the new buses had been imported in Pakistan and will start plying the roads of Lahore in a couple of weeks.

Shah said the bus operator, Daewoo Pakistan Express Bus Service, will require around a week for customs clearance and other operational formalities, while another two weeks were required by the relevant authority to install e-ticketing equipment in the buses.

After the induction of new buses, Shah said, the relevant authority was expecting a dramatic decrease in motorcycles on the city roads. He said the authority would integrate ticketing systems of both the Lahore Metro Bus service and feeder buses.

He said the PMA had a vision to provide reliable and comfortable public transport facility to all citizens within just 500 metres from their place of work or residence.

The PMA had inked an agreement with Daewoo Pakistan in February for procurement, operation and maintenance of 200 feeder buses for integrated bus operations in Lahore.

Earlier, it was announced that these buses would hit city roads in April, but the project was delayed owing to disagreement between the authority and the operator on contractual terms. Later, the issue was resolved amicably and the operator ordered new buses.

A spokesperson of Daewoo Pakistan told The Express Tribune the company was investing Rs3 billion in the procurement of 200 new buses, including 162 large and 38 small buses, and had plans to expand its bus fleet at a later stage.

The company would own and operate these buses on the feeder routes of the Lahore Metro Bus service and bill the PMA on per kilometre basis. The authority will pay Rs165 and Rs140 per kilometre for big and small buses, respectively.

Initially, 200,000 passengers would be benefited daily from the new buses as estimates suggest each bus can transport around a thousand passengers per day.

Official documents indicate these buses will be equipped with Automated Fare Collection and Bus Scheduling System (AFC-BSS) and GPS tracking devices. The operator will set up card (ticket) sale and recharge points at 22 localities on the feeder routes in the city as specified by the authority. These sale points will remain open during the hours the bus will operate – tentatively decided as 18 hours a day. The operator will also provide 15 handheld electronic ticket validators for spot checking, to facilitate PMA assigned ticket inspectors.

The documents show the agreement is signed for six years, which can be extended with mutual consent. The authority has plans to run 1,400 standard or mini buses on 104 routes with a route length of 951km.