The projec­t is part of the metro networ­k in the city
By Imran Adnan
Published: August 24, 2016
Tweet Email 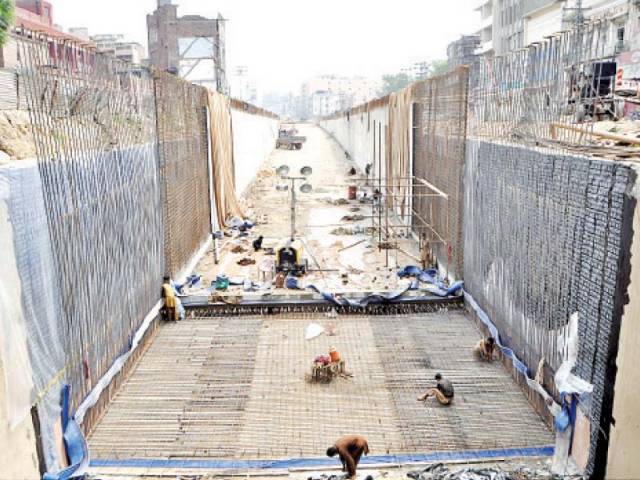 LAHORE: Completion of the Orange Line Metro Train (OLMT) project is likely to be delayed by eight months, even if a favourable verdict is rendered by the Supreme Court on the government’s appeal against a Lahore High Court division bench order barring construction within 200 feet of heritage sites until after a fresh heritage impact assessment, preferably in consultation with UNESCO.

A member of the OLMT steering committee told The Express Tribune that the lawyer for the government were preparing a petition to challenge the LHC order in the apex court. He said the government would file its petition next week.

Talking to The Express Tribune, Shahid Saleem, a contractor for the OLMT Package-1, said, “There are stay orders against construction at 12 points along the metro train route. The critical ones are near The Mall crossing. Construction of the three-storey underground central station should have started in October 2015 but the site has not been cleared yet.”

“The government and the Chinese contractors are pushing local contractors to complete the project on time but it may not be possible,” he said. He said construction of the central station would take at least eight months.

“Building an underground barrel and multi-storey station is an enormous task,” he said.

Muhammad Azhar Siddique, counsel for the original petitioners, said his clients had also decided to approach the Supreme Court to challenge the metro train project on environmental grounds. He said the government had not followed legal course in this regard.

“It initiated construction before getting an environment impact assessment,” he said.

“According to several experts, the project will adversely affect the environment,” he said.

He said, “It is hard to predict how a decision might come from the apex court but it is clear that the project has several road blocks ahead. These include petitions questioning transparency in award of contracts and stay orders against land acquisition.”

The 27-kilometre Orange Line Metro Train project is estimated to cost $1.65 billion and is being funded through a Chinese soft loan.

The project is part of the metro network in the city. It will connect Raiwind Road, Multan Road, McLeod Road, the City railway station and the Grand Trunk Road.