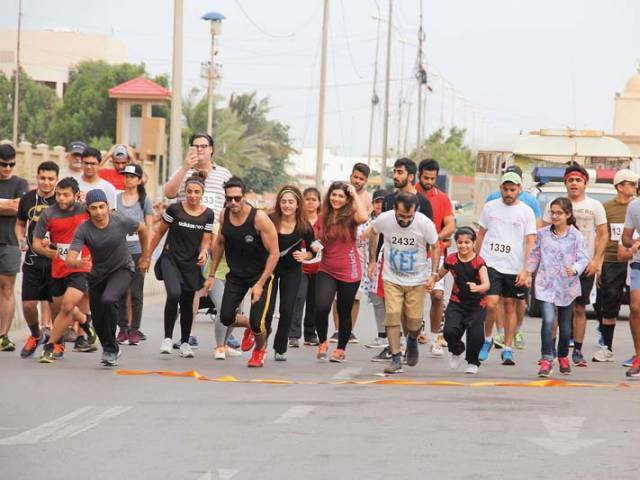 A large number of people participate in the marathon organised to raise awareness about thalassemia (Above) while a woman carries the youngest participant early Sunday morning (Below). PHOTOS: AYESHA MIR/EXPRESS

KARACHI: Yawning and trying hard to keep his eyes open, 14-month-old Zayd Raza Gandhi in his father’s arms was the youngest runner in the five-kilometre marathon held early Sunday morning.

“This is the day he will learn to walk,” said Zayd’s father, Adnan Gandhi, while smiling and looking at his son.

National Institute of Blood Diseases and Bone Marrow Transplant (NIBD) in collaboration with a soon to be registered trust, Ek Neki, organised a charity marathon, titled ‘Run for a Cause!’, which started from Moin Khan Academy in Defence Housing Authority and culminated at Do Darya.

The marathon was organised to spread awareness and create a sense of empathy for people suffering from thalassemia, said NIBD CEO Osama Sultan. The money collected from the marathon would be utilised to cater to people with blood disorders, he said, adding that Rs1,000 were collected from each participant.

A lot of volunteers offered to facilitate the marathon as it was a good cause, informed Ek Neki president Asfand Younus.

And the winner is

There was a tough competition between 21-year-old Aman Shaikh, who came first, and the first runner up, Ahsan Adil. Shaikh said the last 100 metres were neck-to-neck as either runner could have won. However, Adil claimed that the wind was blowing against the participants due to which it became really hard to complete the race. “It was a very tough competition,” he remarked.

The second runner up, Hatim Mustafa, said the hot and humid weather had made it very difficult for them to run. Meanwhile, a female runner, Mantahaa Maqsood, who is a lifestyle and wellness coach, said the marathon was well-organised and for a great cause. “We need more events like these,” she added.