Batsma­n thinks he is yet to give his best to cricke­t
By AFP
Published: August 13, 2016
Tweet Email 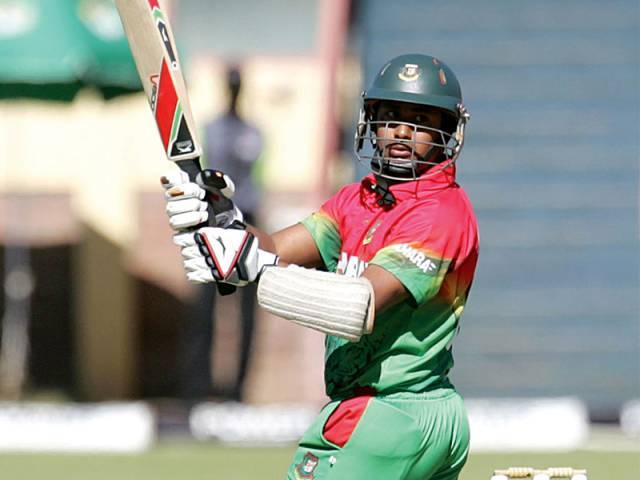 Ashraful, who became Bagladesh’s youngest Test centurion in 2001 at the age of 17 and captained Bangladesh between 2007 and 2009, admitted involvement in fixing. PHOTO: AFP

Ashraful was initially banned for eight years in 2014 after he tearfully confessed on national television to helping fix matches in the scandal-hit Bangladesh Premier League.

The Twenty20 tournament was eventually left suspended in the wake of the match-fixing controversy before resuming in 2015 with six new franchises.

A local appeal panel in September 2014 cut Ashraful’s ban to five years including a two-year suspended sentence, meaning he can return to competitive cricket from August 2016.

The Bangladesh Cricket Board and the International Cricket Council had lodged an appeal to the Court of Arbitration for Sport in Lausanne, Switzerland against his reduced ban in October 2014, but later withdrew it.

“Mr Ashraful is eligible to play domestic cricket from the 13th August 2016.  However, he will be ineligible to play international cricket or the BPL (until 2018),” said Yasin Patel, a British lawyer who represented Ashraful during the trial.

BCB chief executive officer Nizamuddin Chowdhury said they were now waiting for an ICC response to determine which domestic competitions Ashraful will be allowed to play.

“Ashraful”s ban will be lifted on August 13,” Chowdhury told AFP on Friday.

“We have now asked for a clarification from the ICC, clearly specifying which competitions he will be allowed to play.”

Ashraful, Test cricket’s youngest century-maker, made his debut at the national level at the age of 17. He has played 61 Tests, 177 one-day internationals and 23 T20 international matches.

The 32-year old said partial lifting of the ban gave him a fresh opportunity to restart his career.

“This is a new beginning for me,” Ashraful told reporters at his residence after he returned from Britain in the morning.

“I got a new opportunity to revive my career. Now my first priority is to perform well in domestic cricket.

“If I can do that I hope the BCB will take initiative to lift my ban from international cricket too,” he said, adding he still had many years left to play.

“I think I’ve yet to give my best to cricket,” he said.

ICC anti-corruption investigators discovered the fixing scam after being asked by Bangladesh authorities to monitor the lucrative T20 tournament.

Ashraful is now expected to resume his domestic career in late September with the Bangladesh Cricket League, the country’s inter-provincial first-class competition.