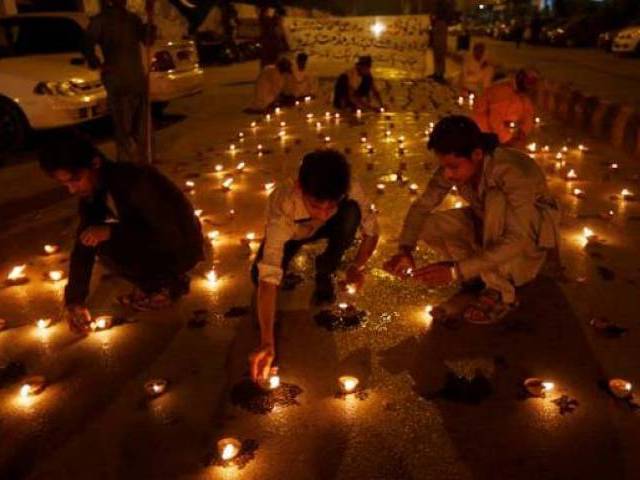 People light oil lamps to honour victims of the blast in Quetta during a vigil in Karachi, Pakistan August 9, 2016. PHOTO: REUTERS

Quetta walas have become all too familiar with the sound of disaster. As soon as a loud explosion is heard in the valley, people switch on their TVs and start flipping through channels to determine where the blast took place and, more importantly, whether their loved ones are safe.

Three days ago, a suicide bomber struck at a hospital in the heart of the city, wiping off what is being called “an entire generation of lawyers” and media men within a matter of seconds.

The sound was followed by thick smoke, which gradually cleared to reveal horrific scenes: carnage everywhere, bodies lying in pools of blood, their clothes ripped apart; some charred beyond recognition. More reporters, law enforcement agencies, and first responders arrived at the site and soon news about the attack began to emerge. And among the names of victims flashing on TV was Shahzad Khan. My dear friend, Shahzad Khan.

A 30-year-old who worked two-three jobs to provide for his family; a father who dropped off his child at school and was murdered in cold blood an hour later in the line of duty. How can that be?

Did his daughter, seven-year-old Abeera, know that that morning would be the last time she kissed her father goodbye outside school? Worst yet, did she know her father was working as a cameraman, considered the most dangerous job in this part of the world, and that too for a mere Rs25,000 ($250). Certainly not.

Shahzad wasn’t the only journalist who lost his life that day. Twenty-six-year-old Mehmood Hamdarad, a cameraman for Dawn News, was also critically injured and later succumbed to his injuries. Dunya News reporter Freedullah and a camera crew member Amin were wounded.

They were among the at least 73 people who lost their lives, and over 140 who were wounded, 26 of them critically, in the attack. For the injured, the “fortunate”, life will now be one of pain and hardship, as is the case for so many victims of bombings.

Monday’s bombing at the hospital was the second time terrorists chose to attack the state-run hospital.

The hospital was crawling with over a 100 lawyers and many journalists, who gathered at the Emergency Gate following the killing of Bilal Anwar Kasi, the former president of the Balochistan Bar Association. Kasi’s body was being shifted to Provincial Sandeman Hospital in the heart of the city, and without a moment of hesitation Shahzad, like many of his colleagues, went off to cover the incident.

‘He wanted to put a smile across everyone’s face’

Reporters, camera crews and other newspaper and new channel staff are a close-knit group. Because of the nature of their job, they often spend more time with each other than they do at home with their families. At the Quetta Press Club, the always-cheerful Shahzad has a strong presence. Just last Thursday, he messaged me, in his characteristically generous and caring way, asking about my health and my future plans. He wanted to put a smile across everyone’s face. “Just have fun Jani (dearest), and enjoy life,” he would say to colleagues. That’s just how he was.

But life was not easy. Shahzad had struggled to get a job at Aaj TV channel. He came from very modest beginnings, born into the family of a health department employee in Kandao, a small town in Mastung, about 25-kilometres from Quetta. All the houses in the town are made of mud, and most people live below the poverty line, barely able to feed their families.

I have known Shahzad since I started my career at a local newspaper over than a decade ago. His first job was as an office boy with the Quetta Daily Kohistan. He moved on to Darti TV where he worked alongside journalist Irshad Mastoi, who was later brutally gunned down at his Online International News Agency office on Quetta’s Jinnah Road. Shahzad’s career rise did not stop there. Being extremely hardworking and proficient at his job, he was soon hired by Dunya News. However, he needed to work two and three jobs to feed his family, since media outlets aren’t known to pay well. After Dunya News, he worked as a copy editor for a local newspaper. Later, he was offered a position at Aaj TV, earning a pay package of Rs25,000 per month. The increase in salary was significant, given that his earlier position had earned him a mere Rs15,000.

This was his final place of work before he life was cut short this Monday.

The main breadwinner of his family, Shahzad was laid to rest beside his father in his ancestral home of Mastung. He leaves behind a widow and three young children — two daughters and a son — the eldest only seven years of age. He is also survived by his 26-year-old brother, who works at the health department since the death of his father.

The most dangerous job in the world

Recently, I was fortunate enough to attend a training session in Islamabad with Shahzad.  We were among 20 journalists from Balochistan receiving training in reporting from a conflict zone. I can clearly recall Shahzad saying, “Media owners never let us attend trainings in another city. It’s good that I got to see Islamabad and could experience it.”

Shahzad was not the first member of the media to fall victim to the violence pervading Quetta. Many journalists have been killed or wounded in similar incidents across the city. The news desk and the employers, however, observe the briefest of pauses after each deadly incident before once again laying pressure on cameramen and reporters to get maximum coverage. This goes against professional ethics of journalism, and so does showing scenes of death and destruction. But few seem to care or are unaware of the ethics and even the dangers of reporting.

“We are the poorly paid, and still we risk our lives,” said Quetta’s most senior photographer Banaras Khan who has been working as a journalist for the past 27 years. “I appeal to international organisations and trade unions of journalists to provide training for people who work at TV channel news desks.”

Employers aside, government and law enforcement agencies in Quetta have failed to implement appropriate security measures despite the frequency of deadly attacks in the region. Quetta Civil Hospital has now been targeted twice using the same vicious modus operandi—first the attackers target a high profile figure in the city; then they target those the mourners.

The law community in Balochistan was one that remained at the forefront of protecting human rights and shinning a spotlight on the restive province. The general perception is that terrorists targeted the community perhaps because of its popularity among the masses. What’s certain is that the government’s security plan has miserably failed and it failed to protect the lives of its people, once again.

In the past, four similar large-scale attacks have taken place in Quetta, one in the Police Lines, another at the same hospital, the third at the Bolan Medical College Teaching Hospital following an attack on Sardar Bahadur Khan Women University and the fourth at at a snooker club in Marriabad area.

Despite this, politicians repeatedly get away with blaming hostile foreign agencies for these massacres. Their primary responsibility is the protection of all citizens. All citizens, not just politicians, security chiefs, and government buildings.

Quetta, it seems, is a safe place only for the chief minister, the frontier corps (FC) chief, the police chief and other bigwigs.

No end in sight

We have lost many friends and we will continue to do so because I don’t see any planning, implementation or appropriate measures being taken in the near future. Add to that, it’s unfortunate that not a single government spokesperson or representative has come forward to brief the media with details of the attack. We had to dig for information on our own.

It seems the government cannot be trusted to utilise the huge sum of money—over Rs30 billion — allocated for the maintenance of law and order in an appropriate manner. The current government has increased the law and order budget by 12%, offsetting that with a decrease in the education budget.  Despite this, nobody feels remotely secure in Balochistan. Quetta has witnessed the killing of journalists, lawyers, doctors, police, security forces, politicians and citizens. The massacres continue unabated.

I’m not a cynic, I’m telling the truth as I see it. People have resorted to adapting to an increasingly perilous environment. They have learned to expect that law enforcers will harass them in the name of security rather than prevent deadly attacks. And have come to accept that all leaders, law enforcers and gatekeepers have to offer are weightless political statements and empty condemnations of terror. Any hope of reclaiming the beautiful city of Quetta is fading, and may soon be lost.