At least 63 people were killed when a bomb explod­ed inside Quetta’s Civil Hospit­al
By News Desk
Published: August 8, 2016
Tweet Email 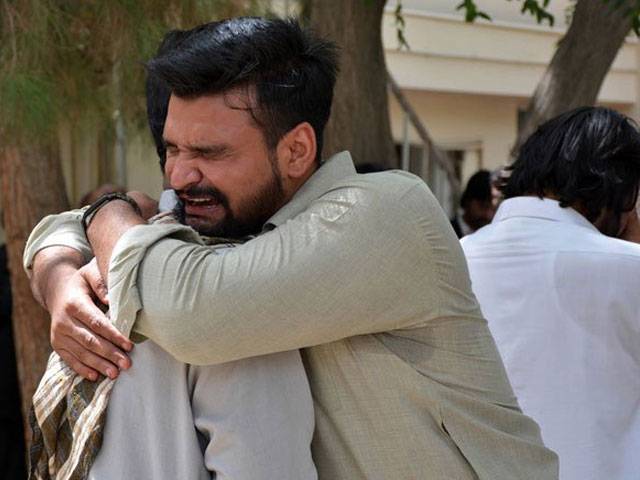 At least 63 people were killed when a bomb exploded inside Quetta’s Civil Hospital. PHOTO: AFP

With at least 63 people killed and over 40 others injured in a bomb blast inside Quetta’s Civil Hospital on Monday, the nation has come together to mourn the tragic attack.

@faysalquraishi it says everything we all want to say at this devastating moment, well said. We are united pic.twitter.com/7wShEIQaaA

Extremely sad and inhuman act of terrorism in #Quetta where a blast at #CivilHospital left at least 53 people dead..

Terrorists continue to show nothing is sacred for them…mosques, churches, schools, hospitals and least of all human lives. #Quetta

Just when you think there is some sense of stability or peace, disaster hits. It just won't stop. #Quetta

Sometimes you do not even have words to explain your grief. My heart goes out to the victims and shaheeds of Quetta. #PrayForQuetta

Those who target hospitals & patients are cowards and enemy of humanity. #Quetta

Pakistan bleeds yet again…you can break our hearts but you cant break our resolve. You can kill us but u can't kill our love for Pakistan.

Rest in peace all those who had to pay the price of an appalling security lapse in #Quetta today https://t.co/SLZdIbxp1Z

Condemning the #QuettaBlast is not enough. Balochistan needs attention immediately. Where is #NAP?Govt's counterterror plan is in shambles

Our counter terrorism strategy is a farce. As victim of terrorism myself the fact that the state has made a mockery of this issue disgust me

Even during wars hospitals & ambulances aren't attacked.My fav city bleeds again.Everyday we wake up to a much more dangerous world #Quetta

Sick and merciless to bomb a hospital, all thoughts with Quetta today

It takes one with no heart or conscience to target a hospital. Have yet to witness one sacred place which terrorists may spare. #Quetta

Another sad day in Quetta. #QuettaBlast

To the victims of the tragic blast: Rest in peace.