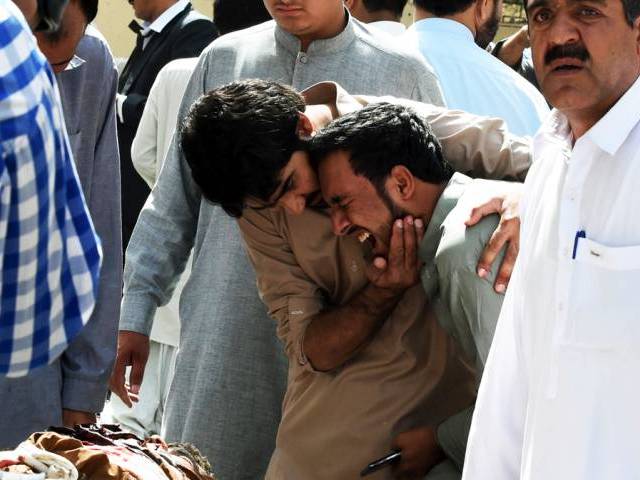 QUETTA / ISLAMABAD: At least 70 people, nearly half of them lawyers, were killed and more than a hundred wounded in a suicide attack targeting mourners gathered at a state-run hospital, on Monday morning. The Balochistan government announced three days of official mourning for the victims of the terrorist attack, one of the deadliest in the country’s history.

The bomber struck as a crowd of lawyers and journalists crammed into the Emergency Department of the Provincial Sandeman Hospital, known as Civil Hospital, after the fatal shooting of president of the Balochistan Bar Association (BBA) Bilal Anwar Kasi earlier in the morning.

Director General Health Dr Masood Nausherwani confirmed at least 70 people have been killed and 112 injured as the body count spiked from earlier estimates. “There are many wounded, so the death toll could rise,” said Rehmat Saleh Baloch, the provincial health minister, voicing his worst fears. An additional district and sessions judge, Muhammad Ali, and a former president of BBA, Baz Muhammed Kakar, were among the dead.

The bombing whipped up fear and panic among residents of Quetta as major shopping districts of the city had been closed soon after the blast.

Police confirmed it was a suicide blast. “The bomber was carrying around eight kilos of explosives packed with ball bearings and shrapnel to inflict maximum casualties,” an official of the Bomb Disposal Squad told The Express Tribune requesting not to be named. The severed legs of the bomber have been recovered and sent for forensic analysis.

The bombing was so intense and loud that it had been heard within a radius of five kilometres. The windows of several shops in the neighbourhood were shattered by the thud.

In solidarity: Students mourn loss of lives in Quetta bombing

Quetta Commissioner Kambar Dashti said the bomber targeted lawyers gathered at the hospital to mourn the killing of BBA president Bilal Anwar Kasi. “It is one of the deadliest terrorist attacks in the history of Quetta,” he added. “Police have collected vital forensic evidence from the crime scene and investigations are under way.”

Bilal Kasi was targeted by two unidentified motorcycle-riding gunmen on Mano Jan Road as he was travelling to work from his home. “Kasi was shot from very close range in order ensure his death on the spot,” medics at the Civil Hospital said.

Home Minister Sarfraz Bugti said the shooting and the bombing were coordinated. “The terrorists first targeted a prominent personality and waited for lawyers and other people to gather at the hospital in large numbers before unleashing carnage,” he added.

The Emergency Department of the hospital was crammed with lawyers and journalists when the bomber detonated his suicide vest. Thick, black smoke filled the hall, covering the emergency exit of the hospital.

Video footage showed bodies strewn on the ground, some still smoking, among pools of blood and shattered glass as shocked survivors cried and comforted one another.

An AFP journalist was about 20 metres away when the bomb went off. “There were huge black clouds and dirt,” he said. “I ran back to the place and saw bodies scattered everywhere and many injured people crying. There were pools and pools of blood around and pieces of human bodies and flesh.”

Nurses and lawyers wept as medics rushed out to help dozens of injured, he said. “People were beating their heads, crying and mourning. They were in shock and grief.”

Pervez Masi, who was injured by pieces of flying glass, said the blast was so powerful that “we didn’t know what had happened”. “So many friends were martyred,” he said. “Whoever is doing this is not human; he is a beast and has no humanity.”

Reporters and camera crew of private television news channels were covering the targeted killing of Bilal Kasi. Two cameramen, Shahzad Khan of Aaj News, and Mehmood Hamdard of DawnNews, were killed on the spot, while Dunya News reporter Freedullah, and cameramen Amin and Fateh were critically wounded.

Police randomly fired gunshots into the air in panic. And it took several minutes to start the rescue operation. A lawyer who survived the attack said he was not allowed inside the Emergency Department by security staff. “I wonder how the bomber managed to get inside as most lawyers were stopped at the entrance,” he told journalists.

UN Secretary-General Ban Ki-moon condemned the bombing, saying it was “particularly appalling” that the suicide attack targeted a group of mourners.

Ban urged the Pakistan government to do its utmost to bring those behind the attack to justice.

“A martyr from the Islamic State detonated his explosive belt at a gathering of justice ministry employees and Pakistani policemen in the city of Quetta,” Amaq said.

The Pakistani Taliban faction Jamaat-ur-Ahrar has also claimed responsibility for the attack.

Jamaat-ur-Ahrar  said it carried out the attack, although the group is believed to have claimed responsibility for bombings in the past that it was not involved in.

“The Tehreek-e-Taliban Pakistan Jamaat-ur-Ahrar (TTP-JA) takes responsibility for this attack, and pledges to continue carrying out such attacks,” said spokesperson Ehsanullah Ehsan in a statement.

Only last week, Jamaat was added to the United States’ list of global terrorists, triggering sanctions.