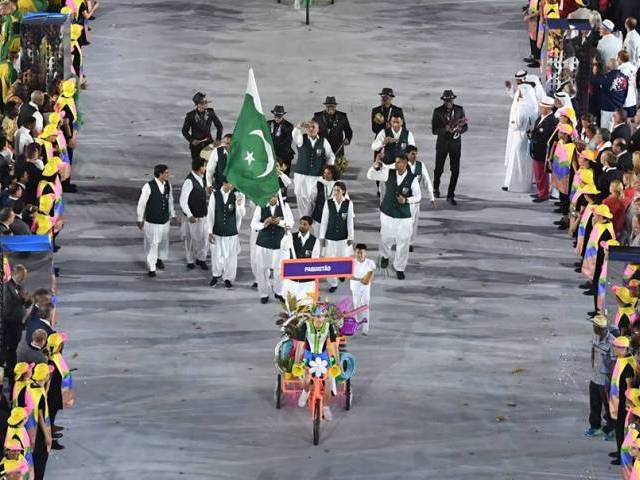 According to Chef de Mission Shaukat Javed, Pakistan’s flag was carried by the 29-year-old Bashir, who along with fellow shooter Minhal Sohail and judoka Shah Hussain Shah are the only three players to qualify for the games on merit through the continental quota.

Bashir, talking to The Express Tribune from Rio, said carrying Pakistan’s flag will be a once in a lifetime experience. “I had no idea that I’ll be carrying Pakistan’s flag in the opening ceremony,” said Bashir. “When I got to know, I was really excited. Qualifying for Rio was already a big achievement and now being the flag bearer made these games even more memorable.”

He revealed Pakistan’s contingent has been training in Rio for the past two days and the shooters are getting tips from their Belarusian coach Vladimir Kovalenko. “The top players from all around the world are here so we will try to register our best scores,” he said, adding that the coach has asked them to stay confident.

Minhal, who is participating in the women’s 10m air rifle, will play the qualification round on the opening day against 50 other shooters.

Bandey, meanwhile, will be swimming in the first heat out of seven for the men’s 400m freestyle event against two other swimmers.

Judoka Shah will fight in his round of 32 of the men’s 100kg category on August 11 while Bashir and Lianna will compete in their men’s 25m rapid fire pistol (RFP) and women’s 50m freestyle event respectively on August 12.

Pakistan’s flag was officially hoisted at the Rio Olympics Village during a welcome ceremony on Thursday, with the village’s mayor welcoming the contingent.