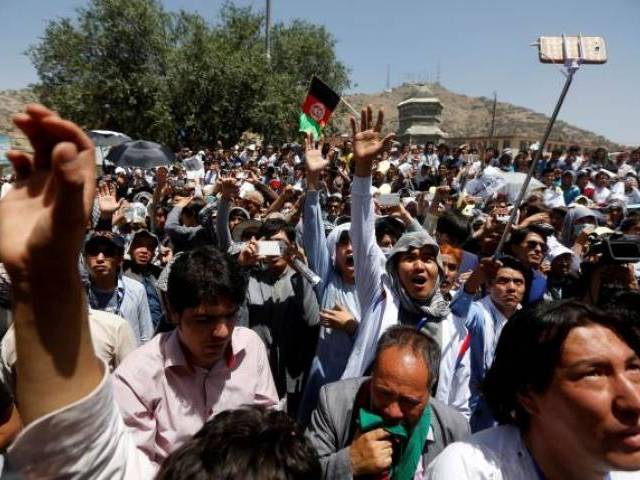 KABUL: A powerful explosion on Saturday ripped through crowds of minority Shia Hazaras in Kabul who had gathered to protest over a power line, killing at least 80 people and leaving 231 others wounded, officials said.

Islamic State (IS) group claimed responsibility for the deadly attack which came after a brief lull during the recent holy fasting month of Ramazan.

The bombings, apparently aimed at sowing sectarian discord in a country well known for Shia-Sunni harmony, came as thousands of Hazaras gathered to protest over a multi-million-dollar power line.

Charred bodies and dismembered limbs littered the scene of the attack, with ambulances struggling to reach the site as authorities had overnight blocked key intersections with stacked shipping containers to control movement of the protesters.

“As a result of the attack 80 people were martyred and 231 others were wounded,” the interior ministry said in a statement.

“Based on initial information, the attack was carried out by three suicide bombers… The third attacker was gunned down by security forces.” An Afghan protester scream near the scene of a suicide attack that targeted crowds of minority Shia Hazaras during a demonstration at the Deh Mazang Circle in Kabul on July 23, 2016. PHOTO: AFP

“The horrific attack on a group of peaceful protestors in Kabul demonstrates the utter disregard that armed groups have for human life,” Amnesty International said in a statement.

“Such attacks are a reminder that the conflict in Afghanistan is not winding down, as some believe, but escalating, with consequences for the human rights situation in the country that should alarm us all.”

In a statement, Afghan President Ashraf Ghani said he was “deeply saddened” by the carnage, adding that the casualties included security officials.

“Peaceful protest is the right of every citizen, but opportunist terrorists infiltrated the crowds and carried out the attack, killing and injuring a number of citizens including some security forces.”

The protest march was largely peaceful before the explosion struck as the demonstrators sought to march on the presidential palace, waving flags and chanting slogans such as “death to discrimination”.

The 500-kilovolt TUTAP power line, which would connect the Central Asian nations of Turkmenistan, Uzbekistan and Tajikistan with electricity-hungry Afghanistan and Pakistan, was originally set to pass through the central province.

But the government re-routed it through the mountainous Salang pass north of Kabul, saying the shorter route would speed up the project and save millions of dollars.

Hazara leaders in the ethnically divided nation lashed out at the Pashtun president, calling the decision prejudiced against the Hazaras, a community that has suffered a long history of oppression.

Saturday’s protest follows a similar demonstration in May, which drew tens of thousands of people.

The three million-strong Hazara community has been persecuted for decades, with thousands killed in the late 1990s by al Qaeda and the mainly Pashtun Sunni Taliban.

Prime Minister Nawaz Sharif condemned the brutal attack in Kabul and expressed sorrow over the loss of lives.

“Terrorism is a common enemy and must be fought with collective and concerted efforts. Pakistan has been bearing the brunt of terrorists as a frontline state in war on terror,” a press release from the PM Secretariat quoted the premier as saying.

“Pakistan is against any kind of terror attacks and determined to eradicate terrorism from the region,” a MOFA statement said.

The ministry also expressed deep condolence with the Afghan government over the loss of innocent lives.