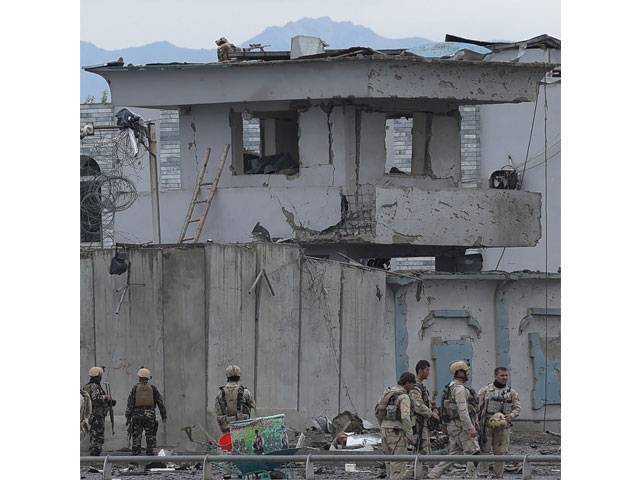 Afghan security personnel inspect the site of a car bomb attack at the gate of a government office in the Puli Mahmood Khan neighbourhood of Kabul on April 19, 2016. PHOTO: AFP

KABUL: Afghan President Ashraf Ghani vowed on Wednesday to avenge “every drop of blood” spilled in this week’s suicide attack in Kabul, as the death toll more than doubled to 64.

“The victims of (the) terrorist attack are all fathers, brothers or children of people,” Afghan President Ashraf Ghani said on Twitter. “We will avenge every drop of Afghan blood.”

The brazen attack on Tuesday targeted an office of the national security services, in an area close to the heart of the government and diplomatic area. Most of the casualties, including 347 wounded, were civilians, Interior Ministry spokesperson Sediq Sediqqi said.

“It is with regret that I announce that 64 people were killed and 347 others wounded in yesterday’s Kabul attack,” Sediqqi told reporters having previously put the toll at 30. “Most of them are civilians.”

Mourners in Kabul held emotionally charged funerals on Wednesday for the dead, many of whom local media said were employees of the targeted security agency.

“The government is unable to stop these attacks,” said Abdul Basir Mobasher, a relative of a security official killed in the attack.