In Quetta, a star in the making

In Quetta, a star in the making 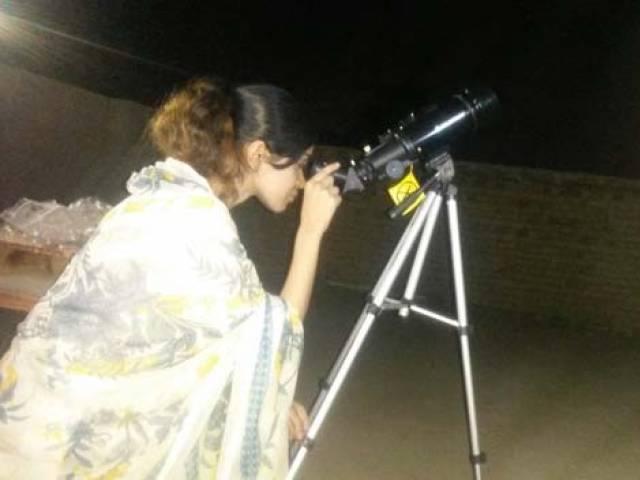 QUETTA: Defying the stereotypical conservative society of Balochistan, a 17-year-old female astronomy enthusiast is ready to take on the world. Norina Shah has attracted the attention of the United Nations chief for her raw talent and extraordinary skills in the world of amateur astronomy.

The teenager is a second-year Intermediate student at Quetta’s Islamia Girls College. Her interest in astronomy has gained her in-depth knowledge, which she shared on social media especially the microblogging website Twitter. Her posts attracted the attention of the international media, leading to appreciation from UN Secretary-General Ban Ki-moon. Her Twitter handle is @aneyeofsky.

“I felt really proud when the UN appreciated my work,” Norina said while talking with The Express Tribune.

The stargazer grew passionate about outer space when she was in the 8th grade. Soon she started finding out new ways to capture pictures of planets, stars and the moon in the night sky.

“I used Twitter to connect with the world and told people across the globe what I could do,” she says.

Soon enough, the young girl was interviewed by the UK-based Eduzine Global magazine, which is run by a company dedicated to “empowering, promoting, showcasing and celebrating young people, according to its website. What is truly different about this company is that it is run by disadvantaged and disabled teenagers and young adults across the globe.

Norina is Eduzine’s Global Young Ambassador for South Asia and is mentioned on its webpage as the “brightest star”. “Norina’s passion for astronomy and her incredible desire to support and promote other young people is admirable, especially when you realise that her hometown is a place where women and girls are regularly targeted by extremists, simply for wanting to learn,” her Eduzine profile reads.

She was also the first runner-up in the inaugural Eduzine Global ACE Young Achiever Awards in 2014.

In recognition of her talent, Norina was awarded a certificate and a telescope apart from a feature article published in the magazine.

“I was so happy and realised that I have got something bigger to do and tell the world that girls only need an opportunity and a platform to excel,” she said, visibly excited. “They gave me the telescope for my research and have been supporting me to come forward.”

Eduzine also invited her to go to the US for attending a conference on astronomical studies. She had to turn down the offer back then because of her studies. She has again been invited to a week-long conference in the US in 2017 which she is likely to attend.

After the publication of the Eduzine article, Norina says the UN social media team wrote her an email, saying the agency’s head had appreciated her talent and interests. “On October 18 last year, UN chief Ban Ki-moon appreciated my efforts,” she says with a gleaming smile.

In a society like Balochistan with conservative perspectives, Norina’s father Hafeezullah is still optimistic about his daughter’s dreams. Hafeez, a store keeper at Civil Hospital Quetta, has always encouraged his daughter while living in a society considered oppressive towards girls. “I will not worry if my daughter goes abroad for studies as women have more protection there,” he said. “She will be safer than she is in Pakistan.”

According to a survey by not-for-profit Alif Alaan, over 75% of girls in Balochistan are out of schools.

“My family has never stopped me from anything and have always supported me in pursuing any career I want to,” Norina says.

“Astronomy is given no attention at the school level,” she said. The internet was her only stage for studying and searching content about astronomy. “If there were no social media, I would have faced hardships too.”

Balochistan to move CCI over water dispute with Sindh