Compet­ing claims to the South China Sea have for decade­s been a source of tensio­n in the region­
By AFP
Published: June 22, 2016
Tweet Email 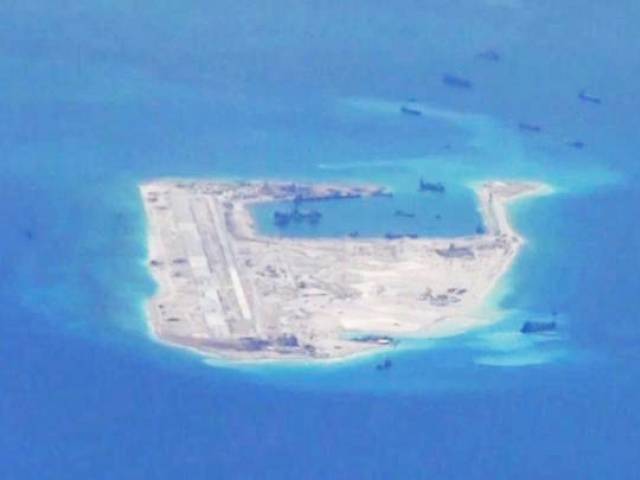 Chinese dredging vessels are purportedly seen in the waters around Fiery Cross Reef in the disputed Spratly Islands in the South China Sea in this still image from video taken by a P-8A Poseidon surveillance aircraft provided by the United States Navy May 21, 2015. US. Navy/Handout via Reuters

MANILA: Competing claims to the South China Sea have for decades been a source of tension in the region.

The Philippines filed a case before an international arbitration tribunal at The Hague to challenge China’s claims to most of the waters, with a decision expected in the coming weeks.

Below are key facts on the sea and the territorial disputes:

Most of its hundreds of small islands, islets and rocks were originally uninhabited. The Paracel and Spratly chains contain the biggest islands. Scarborough Shoal is a small outcrop in the east.

The sea is the main maritime link between the Pacific and Indian oceans, giving it enormous trade and military value. Its shipping lanes connect East Asia with Europe and the Middle East. Over $5 trillion in ship-borne trade passes through the sea annually.

Major unexploited oil and gas deposits are believed to lie under the seabed.

The sea is home to some of the world’s biggest coral reefs and, with marine life being depleted close to coasts, it is important as a source of fish to feed growing populations.

China and Taiwan both claim nearly all of the sea, while Vietnam, the Philippines, Malaysia and Brunei each have overlapping claims to parts of it.

Beijing’s argument is based largely on Chinese maps dating back to the 1940s with a “nine-dashed line” that approaches the coasts of other countries.

Beijing and most other countries know it as the South China Sea. Hanoi calls it the East Sea and Manila officially refers to it as the West Philippine Sea.

China has held all of the Paracel islands since a conflict with South Vietnam in 1974. It has controlled Scarborough Shoal, a rich fishing ground 230 kilometres (140 miles) off the Philippine island of Luzon, since 2012 and occupies at least seven of the Spratly islands. Vietnam is believed to occupy or control 21 of the Spratlys and the rest are divided between Brunei, Malaysia, the Philippines and Taiwan.

There have been two armed conflicts between China and Vietnam in the sea.

In 1974, a clash erupted between the South Vietnamese navy and Chinese forces that left about 50 Vietnamese troops dead.

The other major conflict occurred when Vietnam and China fought a naval battle on Johnson Reef in the Spratlys in 1988 that killed about 70 Vietnamese military personnel.

Chinese naval vessels have fired at other times on Vietnamese fishing boats in the area.

China has in recent years sought to dramatically expand its presence in the sea, raising tensions with its neighbours and beyond.

In 2012, China gave new powers to Sansha, a city on Hainan island, to administer Chinese rule over its South China Sea domain.

Since then, it has conducted massive dredging and artificial island-building activities in the Spratlys, dwarfing the scale of reclamation work of other claimants.

The Pentagon said China added 3,200 acres (1,295 hectares) of land to the seven features it occupies. Beijing installed structures on these new islands, including radar systems and runways long enough for huge commercial or military planes.

The 10-member Association of Southeast Asian Nations and China adopted a non-binding “declaration of conduct” in 2002 to discourage hostile acts. All sides agreed not to use threats or force to assert claims.

But China has since refused to turn it into a legally binding “code of conduct”.

The dispute has caused deep divisions within ASEAN, which normally seeks to operate on a basis of consensus among its members. The Philippines has in particular pushed for a tough ASEAN stance against China. But Chinese allies Laos and Cambodia have been widely seen as blockers of such moves.

The Philippines filed its case at the Permanent Court of Arbitration (PCA) in 2013, becoming the first and only country to legally challenge China’s claims.

But Vietnamese and Indonesian officials have said they are considering legal action.

While not a party to the case, Vietnam also submitted a statement to the PCA’s tribunal in 2014 affirming the court’s jurisdiction and rejecting China’s nine-dashed line.

China denies the tribunal has jurisdiction on the issue and insists that it will not abide by its decision.