Mayor of Sansha city said he hopes the area will become a major touris­t attrac­tion compar­able to the Maldiv­es
By Reuters
Published: May 27, 2016
Tweet Email 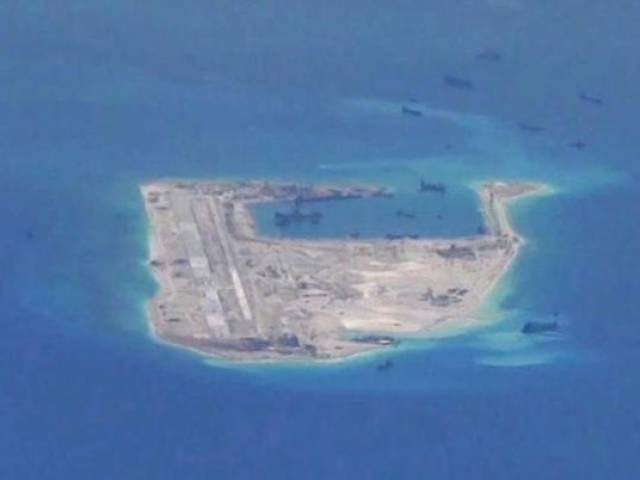 Chinese dredging vessels are purportedly seen in the waters around Fiery Cross Reef in the disputed Spratly Islands in the South China Sea in this still image from video taken by a P-8A Poseidon surveillance aircraft provided by the United States Navy May 21, 2015. PHOTO: Reuters

China aims to turn some of the islands in the disputed South China Sea into Maldives-style resorts catering for weddings with new developments on areas that don’t need a military presence, a state-run newspaper quoted a top official on Friday as saying.

China began tourist cruises to the South China Sea on a trial basis in 2013, as part of efforts to cement its claims by boosting the civilian presence there.

China claims most of the energy-rich waters through which about $5 trillion in ship-borne trade passes every year. Neighbours Brunei, Malaysia, the Philippines, Taiwan and Vietnam also have claims.

In an interview with the official China Daily, Xiao Jie, mayor of what China calls Sansha city, said he hopes the area will become a major tourist attraction comparable to the Maldives.

“We will develop some islands and reefs to accommodate a select number of tourists,” Xiao said, adding they would be in places without a military presence. “It will be an orderly and gradual procedure.”

Sansha city is on Woody Island in the Paracel archipelago, China’s administrative base for islands and reefs it controls.

“The arrival of tourists will nourish the need for divers and windsurfers,” he said.

Xiao said the cruises had been very popular with tickets hard to come by.

“It is not an easy trip, but many people with a patriotic spirit want to try it,” he added.

A second cruise ship would start operating soon, the newspaper said. There would also be regular flights to the southern Chinese island of Hainan, and Xiao said he was hopeful of direct flights one day to Beijing.

The report did not say if foreigners would be allowed to visit. To date, only Chinese nationals have be permitted to go on tours there.

It is also not clear if any of the islands in the Spratlys will be opened to tourists.

The United States and its allies in the region have voiced concern about China’s increasingly assertive pursuit of its claims in the South China Sea, including artificial island building and the construction of airfields and other military facilities.

China says most of the building work is for civilian purposes.