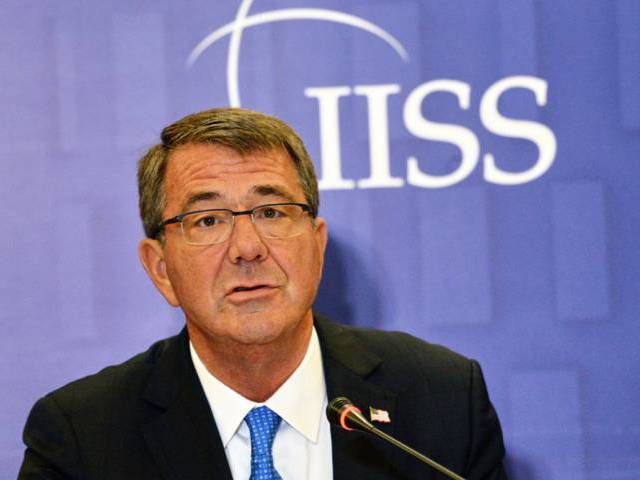 US Secretary of Defense Ashton Carter speaks at a press conference on the sidelines of the 15th International Institute for Strategic Studies (IISS) Shangri-La Dialogue in Singapore on June 4, 2016. Chinese construction on a South China Sea islet claimed by the Philippines would prompt "actions being taken" by the United States and other nations, US Defense Secretary Ashton Carter warned June 4. AFP PHOTO

SINGAPORE: Chinese construction on a South China Sea islet claimed by the Philippines would prompt “actions being taken” by the United States and other nations, US Defense Secretary Ashton Carter warned Saturday.

Speaking at a security summit in Singapore, Carter said Beijing risks building a “Great Wall of self-isolation” with its military expansion in the contested waters, but he also proposed stronger bilateral security cooperation to reduce the risks of a mishap.

“I hope that this development doesn’t occur because it will result in actions being taken both by the United States, and actions being taken by others in the region that will have the effect of not only increasing tensions but isolating China,” Carter said when asked about Scarborough Shoal in a forum also attended by senior Chinese military officials.

Hong Kong’s South China Morning Post has reported that China plans to establish an outpost on the shoal, located 230 kilometres (140 miles) off the Philippines, which considers it part of its exclusive economic zone.

Beijing claims nearly all of the strategically vital sea and has developed contested reefs into artificial islands, some topped with airstrips.

Manila says China took effective control of Scarborough Shoal in 2012, stationing patrol vessels and shooing away Filipino fishermen, after a two-month stand-off with the Philippine Navy.

Carter declined to elaborate when later pressed on what “actions” Washington might take.

The US warning came ahead of a ruling from the Permanent Court of Arbitration at The Hague on a case brought by the Philippines against China, which has shunned the proceedings and says it will not recognise any ruling.

In a prepared speech, Carter said the United States views the upcoming finding “as an opportunity for China and the rest of the region to recommit to a principled future, to renewed diplomacy, and to lowering tensions, rather than raising them”.

The Philippines, Brunei, Malaysia and Vietnam have competing claims in the sea, which encompasses vital global shipping routes and is believed to have significant oil and gas deposits.

Beijing’s territorial claims, based on controversial historical records, have also pitted it against the United States, which has conducted patrols near Chinese-held islands to press for freedom of navigation.

“Unfortunately, if these actions continue, China could end up erecting a Great Wall of self-isolation,” Carter said in his speech.

He suggested the United States and China would benefit from better military ties — both to build understanding and to avoid the risk of mishaps.

Admiral Harry Harris, the commander of the US Pacific Command, said in Singapore that such incidents were rare, and noted that US and Chinese naval vessels generally have “positive interactions.”

Carter’s attendance at the summit is part of a broader US diplomatic push, known as the “rebalance”, to boost alliances in the Asia-Pacific region.

In a report last month, the Pentagon said China put its land reclamation efforts on hold in the Spratly Islands chain at the end of 2015. Instead, it focused on adding military infrastructure to its reclaimed features.

Another regional security concern at the Singapore forum is North Korea’s nuclear program and its so-far unsuccessful missile tests.

Seoul and Washington want to deploy the United States’ sophisticated Terminal High Altitude Area Defence System (THAAD), that would protect against North Korean missiles, though Beijing worries about the system being deployed on its doorstep.

“It’s not about China,” Carter said. “It’s about the North Korean missile threat, which is a clear threat to South Korea, to our forces there and to our allies in Japan.”