'No other Navy can concen­trate this much combat power on one sea...It was truly impres­sive' US Navy Rear Admira­l
By AFP
Published: June 19, 2016
Tweet Email 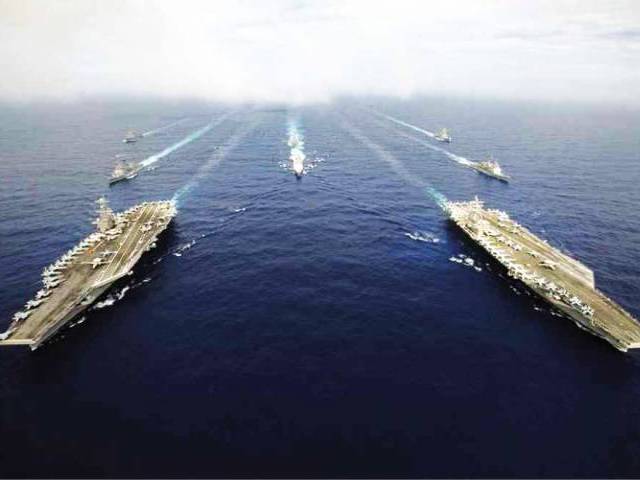 The Nimitz-class aircraft carriers USS John C. Stennis and USS Ronald Reagan conduct dual carrier flight operations in support of security and stability in the Indo-Asia-Pacific region. The activities mark the US Navy’s continued presence throughout the area of responsibility. US NAVY PHOTO

The command said the operations marked America’s continued presence in the Asia-Pacific as China expands its maritime strength and engages in massive island building activities in disputed waters.

“No other Navy can concentrate this much combat power on one sea…It was truly impressive,” said US Rear Admiral Marcus Hitchcock, carrier strike group commander.

US Defence Secretary Ashton Carter visited the Stennis in April as it sailed off the Philippines near the disputed area where China has expanded islets and reefs into islands capable of supporting airfields and other installations.

The Philippines has been improving its defence ties with the US, its longtime treaty ally and former colonial ruler, to help boost the ability of one of Asia’s weakest armed forces.

The US exercises synchronized the activities of over 12,000 sailors, 140 aircraft, six combatants and the two carriers, said Hitchcock.

The command said the drills were meant to promote freedom of navigation and overflight in the region’s airspace and waters.

The US Navy said it has been conducting dual carrier strike group operations for several years in the Philippine Sea, the South China Sea and the East China Sea, where China has a separate dispute with Japan over small islands.

Philippine defence department spokesman Peter Galvez said the exercises showed that the US was “resolute” in fulfilling its often repeated “ironclad commitment” to defend the Philippines.

“We welcome the strong cooperation and partnership we have with our friends and allies … in light of (the dispute) where our legitimate rights have been overstepped,” he told AFP.

The Philippines is awaiting a ruling from an international arbitration tribunal against China’s claims to most of the South China Sea.

Vietnam, Malaysia, Brunei and Taiwan also have overlapping claims to the strategic waterway, through which pass some of the world’s most active shipping lanes.