Ramazan profiteering: Prices of fruits, groceries rise as no one follows fixed rates

Ramazan profiteering: Prices of fruits, groceries rise as no one follows fixed rates 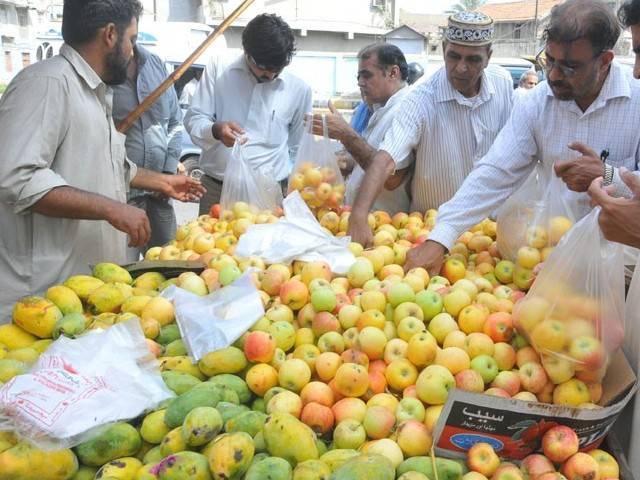 KARACHI: Instead of slashing prices, this Ramazan too sees a hike in prices of essential commodities as the government fails to implement its fixed prices.

The newly appointed commissioner, Ejaz Ahmed Khan, had told officials to conduct raids at different stores and make sure they are following the official price list. But the prices on the first day of Ramazan were much higher than the government’s rates.

Dissatisfied: Locals irked by surging food prices ahead of Ramazan

Shoppers who made their way to grocery stores on Tuesday, hoping to avail the discounted prices, were disappointed. Rehan Ali, who was shopping at Metro Cash and Carry store in Gulshan-e-Iqbal, grabbed a handful of Kabuli chana from a huge container but immediately threw it back once he saw the price. “Nowhere in the city can you find affordable commodities,” he complained. The chanas at retail stores are bring sold at Rs220 per kilogramme (kg) for high quality and Rs195 per kg for low quality even though the government has fixed their prices at Rs110 and Rs98 per kg, respectively.

According to the superstore’s floor in-charge Amir Iqbal, they were selling all the products according to the rates set by the commissioner. The commissioner’s list has been pinned at every corner of the store, he pointed out, admitting that it was possible that the old and new rates are taped side by side and had created some confusion.

The situation at makeshift markets is not too different. Bananas, the most popular fruit during Ramazan, was being sold in Gulistan-e-Jauhar at Rs120 a dozen for high quality ones and Rs100 for regular quality ones. The commissioner’s list priced them at Rs87 a dozen for good quality and Rs65 for average quality.

A fruit vendor in front of Darul Sehat Hospital, Abdul Rehman, held the commissioner’s price list in his pockets but refused to follow the rates mentioned. “The commissioner set the price sitting in his air-conditioned room and is unaware of the prices on ground,” he said. “We get these bananas at Rs90 and Rs80 a dozen from the market. How can we sell them at the government’s rate?”

Every year the commissioner’s team comes and a chaos erupt in the market but nothing happens, he reasoned.

Meanwhile, the owner of a meat shop in Gulistan-e-Jauhar insisted on selling chicken at Rs260 per kg, saying he did not know of any commissioner nor did he consider any price list while trading meat. “We have a setting with the officials, who collect bribe from us every three weeks and let us sell the meat at our own prices,” he claimed. The government’s rate for chicken meat is Rs245 per kg.

A similar trend was witnessed in DHA. A vendor in Phase II, Hamidullah Vegetables and Fruits, had erased all the rates mentioned at the board at his shop and continued selling at exorbitant prices. The shopkeeper, who was unwilling to share his name, claimed that no one in the city was following the commissioner’s rates then why should he?

According to resident Sami Siddiqui, it is better if the government does not raid these markets. “During raids, the government officials confiscate the carts and fine the retailers,” he said, adding that when the retailers get their carts back, they sell the products at a much higher rate to cover up their losses. “At the end of the day, the consumer always suffers,” he said.

For his part, Gulshan-e-Iqbal assistant commissioner Shoukat Ali Ujjan told The Express Tribune that they took it easy on the violators on the first day of Ramazan. “We have only warned the shopkeepers and vendors to sell their commodities according to the government’s price list,” he said. If they continue to violate the official list, their teams will issue challans and arrest violators.

The commissioner’s price checking teams arrested five profiteers  on Wednesday and sent them to prison. They also collected Rs86,000 from 52 profiteers.

Even Malir deputy commissioner Syed Muhammad Ali Shah visited different markets to check prices. He advised buyers to ask for the price list from the seller and to report to his office if they find any discrepancies.