'Countr­ies outsid­e should play a constr­uctive role in this regard, not the other way around' admira­l Sun
By AFP
Published: June 5, 2016
Tweet Email 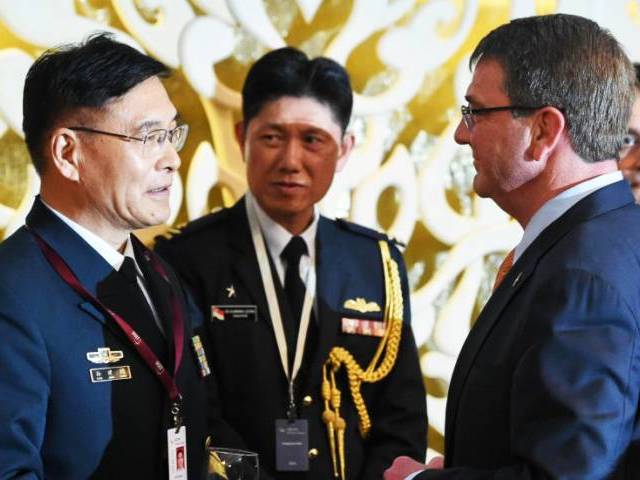 PLA Admiral Sun Jianguo, who is leading the Chinese delegation, chats with US Secretary. PHOTO: AFP

SINGAPORE: China on Sunday hit out at US “provocations” and said it does not fear “trouble” over its territorial disputes with neighbours in the South China Sea.

“Countries outside should play a constructive role in this regard, not the other way around. The South China Sea issue has become overheated because of the provocations of certain countries for their own selfish interests,” Admiral Sun Jianguo told a security summit in Singapore.

Sun spoke one day after US Defense Secretary Ashton Carter warned that Chinese construction on a South China Sea islet claimed by the Philippines would prompt “actions being taken” by the United States and other nations.

“We do not make trouble but we have no fear of trouble,” the Chinese admiral said.

Pentagon chief Carter also said Saturday that Beijing risks building a “Great Wall of self-isolation” with its military expansion in the contested waters.

But he also proposed stronger bilateral security cooperation with China to reduce the risks of a mishap.

Admiral Sun on Sunday repeated China’s pledges to seek a peaceful solution but accused Washington of a “Cold War” mentality.

“Any countries not directly concerned are not allowed to sabotage our path of peace for selfish gains,” Sun told the annual security forum known as the Shangri-La Dialogue.

Rhetoric has escalated ahead of a ruling from the Permanent Court of Arbitration at The Hague on a case brought by the Philippines against China, which has shunned the proceedings and says it will not recognise any ruling.

Hong Kong’s South China Morning Post has reported that China plans to establish an outpost on Scarborough Shoal, located 230 kilometres (140 miles) off the Philippines, which considers it part of its exclusive economic zone.

Beijing claims nearly all of the strategically vital sea and has developed contested reefs into artificial islands, some topped with airstrips.

Manila says China took effective control of Scarborough Shoal in 2012, stationing patrol vessels and shooing away Filipino fishermen, after a two-month stand-off with the Philippine Navy.

Carter declined to elaborate when pressed on Saturday over what “actions” Washington might take.