Shortl­y after the nikah, the police manage­d to arrest the groom and took the minor girl into protec­tive custod­y
By Our Correspondent
Published: June 5, 2016
Tweet Email 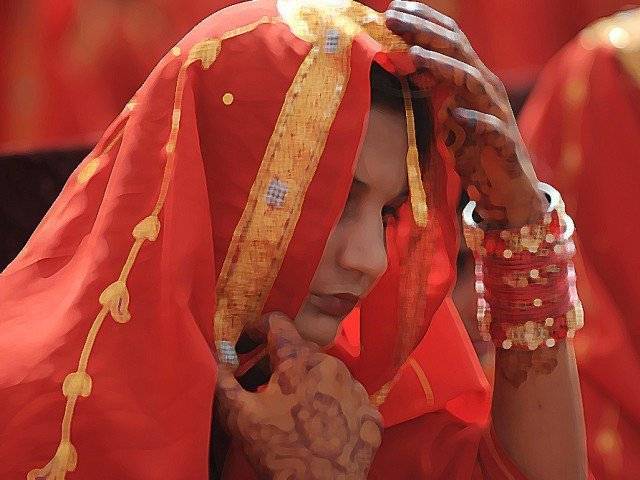 A file photo of a bride. PHOTO: AFP

SUKKUR: In yet another case of child marriage, an 11-year-old girl was married to a 61-year-old local landlord in Naseer Khan Samejo village, Thul taluka, Jacobabad, within the jurisdiction of the B-Section police on Saturday.

Shortly after the nikah, the police managed to arrest the groom and took the minor girl into protective custody. According to a Thul-based journalist, Gul Hassan Pahore had consented to marry his 11-year-old daughter, Gul Zadi, to 61-year-old Karamullah Pahore after taking Rs300,000. On Saturday, when all the arrangements had been finalised and the maulvi had been called to solemnise the nikah, someone from the village informed the police.

B-Section SHO Ghulam Bashir Khokhar told The Express Tribune that when he received information about the minor girl being married to an elderly man, he decided to wait for the bride and the groom at the exit of the village instead of rushing to their house. He explained that he decided to do so as when the police raid the houses in such cases, family members often level allegations against the law enforcers of torture and stealing valuables.

“Therefore, I, along with my team, kept waiting at the exit of the village and as soon as the car carrying the bride and the groom appeared, we took both of them into custody and allowed the other three women [accompanying them] to go,” he said.

The man and the girl were produced in the court of a civil judge of Thul who, after hearing the case, remanded the accused into judicial custody for seven days while the girl, as per her desire, was allowed to go with her mother. He said that the girl’s father and the maulvi are still at large and will be arrested soon.

Meanwhile, the journalist claimed that the B-Section also arrested Gul Hassan along with Karamullah while the maulvi, Muhammad Amin Pahore, managed to escape. The police registered an FIR against Karamullah, Gul Hassan and Muhammad Amin under the Child Marriage Act. The journalist told The Express Tribune that Karamullah is a local landlord while the girl’s father is a poor man. Taking advantage of his poverty, Karamullah offered him Rs300,000 to marry his minor daughter to him. Accepting his offer, Gul Hassan consented to marry his daughter to him.