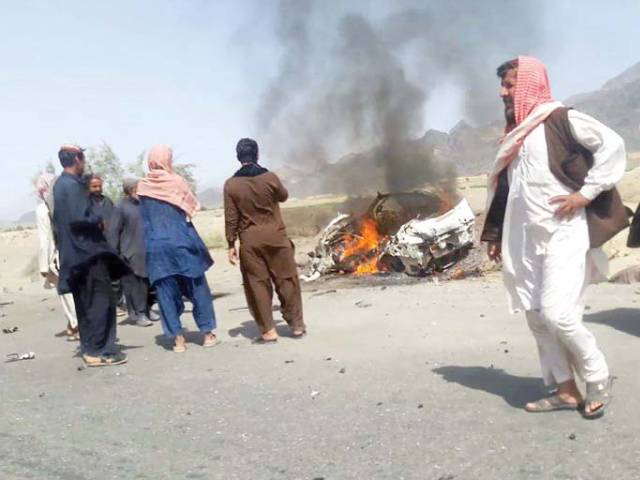 People gather around a destroyed vehicle in which Mullah Akhtar Mansour was travelling on May 21, 2016. PHOTO: AFP

QUETTA/ISLAMABAD: As DNA tests confirmed on Sunday that the second man killed in the May 21 US drone strike was not Wali Muhammad but Mullah Akhtar Mansoor, the brother of a chauffeur killed alongside the Afghan Taliban chief pressed murder and terrorism charges against unnamed US officials.

Muhammad Azam was driving Wali Muhammad from the Taftan border crossing post in his car when a remotely piloted US aircraft had bombed his four-wheeler in the Naushki district of Balochistan. US officials described him as a ‘second male combatant’ but according to Pakistani security officials and relatives, he was a chauffeur who worked for the Al Habib rental company based out of Quetta.

His brother Muhammad Qasim said Azam was an innocent man who was providing for his four children and had been murdered.

“US officials whose name I do not know accepted the responsibility in the media for this incident, so I want justice and request legal action against those responsible for it,” Qasim said in an application written to the tehsildar of Naushki. “My brother was innocent and he was very poor who has left behind four small children and he was the lone bread earner in the family,” he added.

The FIR No. 13/2016 registered with the Mall police station includes Sections 302 and 109-427 of the Pakistan Penal Code, 3-4.5 of the Explosive Substances Act and 7/Anti-Terrorism Act (murder and terrorist attack using explosives). A copy of the FIR dated May 25 is available with The Express Tribune.

Qasim said his brother was driving a car bearing registration number ALL-570 on May 21 around 3:30pm when a US drone fired a missile, killing him instantly.

Drone attacks have proven extremely controversial with the Pakistani public and rights groups. In 2013, Amnesty International said the US could be guilty of war crimes by carrying out extrajudicial killings. A separate report on drone strikes in Yemen by Human Rights Watch accused the US of killing civilians and causing disproportionate civilian harm.

Authorities confirmed the second body retrieved from the wreckage of the car belonged to Mansoor after matching DNA samples from it to those taken from one of his close relatives. “The relative had come to Pakistan to claim and take Mansoor’s body to Afghanistan,” the spokesman said.

Initially, Pakistan was reluctant to confirm the second man killed in the strike was Mansoor, because the body was charred beyond recognition and a Pakistani passport and identity card recovered from the site identified him as Wali Muhammad, a resident of Killa Abdullah district of Balochistan.

Interior Minister Chaudhry Nisar Ali Khan told a news conference on Tuesday that he could not confirm Mansoor was killed in the strike. Two days later, however, Prime Minister’s Adviser on Foreign Affairs Sartaj Aziz admitted that ‘all indicators’ suggested the Taliban chief had been killed in the attack.

The discovery of the Pakistani passport and computerised national identity card (CNIC) prompted an order from Interior Minister Nisar for a nationwide re-verification of CNICs to detect if more foreign nationals have also illegally obtained Pakistani identity.