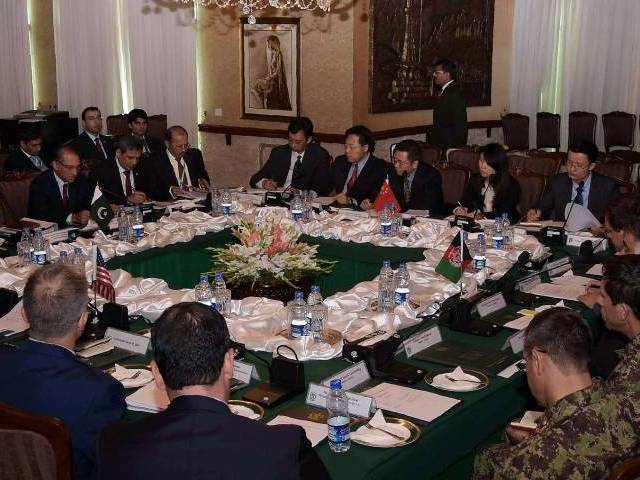 In this handout photograph released by the Associated Press of Pakistan (APP) on May 18, 2016, Foreign Secretary Aizaz Ahmad Chaudhry (centre L) chairs the fifth round of four-way peace talks with Afghanistan, US and Chinese delegates at the Foreign Ministry in Islamabad. PHOTO: AFP

ISLAMABAD: Senior officials from Pakistan, Afghanistan, the United States and China agreed on Wednesday to give peace a chance, saying talks remain the only option for bringing an end to the lingering conflict in Afghanistan.

The meeting of the Quadrilateral Coordination Group (QCG), headed by Foreign Secretary of Pakistan Aizaz Ahmed Chaudhry, was held in Islamabad after a gap of three months against the backdrop of growing differences among the countries involved in the Afghan peace process.

Ahead of the crucial QCG meeting, Afghanistan had said it would push for declaring the Taliban as ‘irreconcible’ since they refused to join the peace process.

But at the end of 5th meeting of QCG since it was formed in December last year, all sides agreed on the need for efforts to start peace process.

The QCG has reiterated that violence serves no purpose and that peace negotiations remain the only option for a political settlement.

In this respect, the quadrilateral group reaffirmed to use their respective leverages and influences, said a joint statement issued by the foreign office.

Moreover, the QCG strongly condemned the April 19 terrorist attack in Kabul and underscored that those who perpetrate such acts of terrorism should be ready to face consequences of their actions, while expressing continued determination to advance the goal of an Afghan-led, Afghan-owned peace and reconciliation process.

The next QCG meeting will be convened later some time on mutually agreed date.

Corruption charges: NAB officer released due to lack of evidence