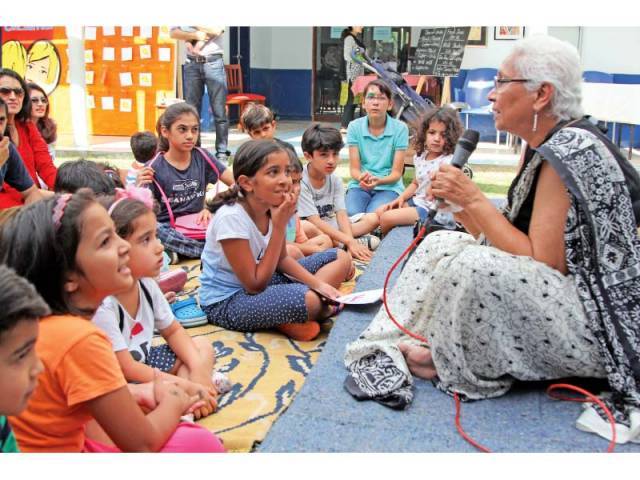 In a befitting tribute to T2F founder Sabeen Mahmud, the Women’s Action Forum (WAF) gave a video presentation on notable women of Pakistan who were targeted for a common crime: raising their voice against injustice and fighting for rights.

To mark Mahmud’s first death anniversary that falls today, T2F organised the Creative Karachi Festival (CKF) at Alliance Française de Karachi. The two-day event began on Saturday. According to one of the organisers, Asad Alvi, the festival was everything that Mahmud believed in – art, literature and poetry among other things. “To me, Sabeen is art and art is Sabeen,” he said.

The legacy of Perween Rahman In the Upper Gallery on Saturday, the WAF gave a video presentation to pay tribute to the slain activist and the many women of Pakistan who have been targeted for fighting injustice. The video included a clipping of Mahmud, in which she talks about the perils of being vocal in our society. “You have to protect yourself from the doom and the gloom and newspapers … and onslaught,” she said. “People don’t feel safe. I have a very cavalier attitude to fear so maybe, you know, I don’t care. I just feel the time comes when the time will come.” Contemporary Sufi singer Abida Parveen’s beautiful ghazal, Dhoondo Gay Agar Mulkon Mulkon, continued to play as perfect background music of the tributary video.

In loving memory of Sabeen Mahmud

After Mahmud, homage was paid to other women, such as slain prime minister Benazir Bhutto, martyred social activist Perween Rahman, assassinated politician Zahra Shahid Hussain, former Punjab social welfare minister Zille Huma Usman who was shot dead and the many polio workers who are frequently targeted in the line of duty. At the end of the video, a message was displayed: “WAF feels that the world has always documented His-story up to now but we women feel it is time that we documented Her-story too, which we just presented.”

Nevertheless, it was sad to see that even the progressive women belonging to WAF forgot to pay tribute to female education rights activist Malala Yousafzai, who was targeted by the Taliban in 2012, among the women chosen to be honoured. After the video presentation, one of the founding members of WAF, Anis Haroon, spoke about the role and mission of the female rights organisation, which was established in September, 1981. “WAF was created because it was [military dictator] Ziaul Haq’s era and a system of injustice was being enforced in the name of Islamic laws,” she said, adding that women revolted at that time. She recalled the example of a girl who was sentenced to receive 100 lashes because she had married out of her choice. “That is when we, women, decided that we will not give in to a dictator and will fight for democratic and liberal values.”

She recounted how these brave and resilient women raised their voice against every kind of injustice and discriminatory laws that were being enforced in the name of Islam, shedding light on the importance of the separation of state and religion.

After the videos and the speeches, classical dancer Suhaee Abro rendered a beautiful performance of kathak. Talking to The Express Tribune after her performance about the challenges she faces as a female dancer in our society, she lamented how it is sometimes a taboo even for men to dance because we only perceive the body in sexual parameters. “Nobody likes watching my performances because they are not Bollywood, they are not sexy,” she said.

In fond memory: Sabeen, who taught us how to love