Mata Hinglaj Yatra: To Hingol, a pilgrimage to reincarnation

Mata Hinglaj Yatra: To Hingol, a pilgrimage to reincarnation 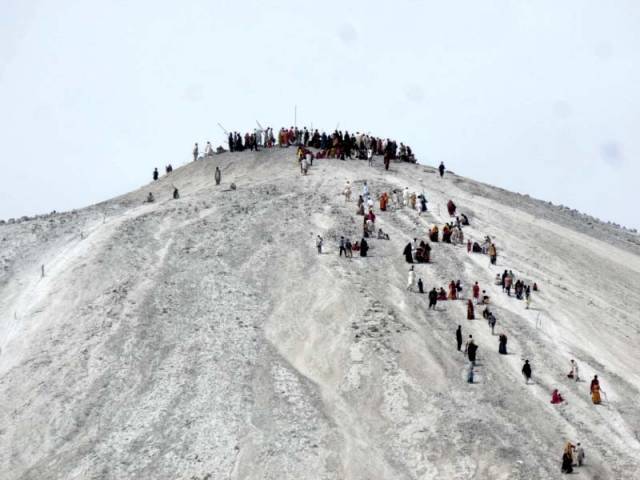 Pilgrims make their way to the top of Chandergup mud volcano in Hingol. PHOTO: ALI XAFAR/EXPRESS

KARACHI: In the searing heat of Balochistan, Sunil Kumar climbs up the Chandergup volcano barefoot. Sweating profusely and out of breath, he treads slowly, his ascent interjected by chants of ‘Jai Mata Di’.

Sunil is among the hundreds of pilgrims making their way up to the summit of the 300-foot-high mud volcano in Hingol National Park. Once on the top, he takes out a coconut from his side pocket and throws it in the gooey soup to thank the gods for granting his wish.

The steep trek to Chandergup’s rim is the first ritual of the Mata Hinglaj Yatra — considered the holiest pilgrimage of Hindus in the world. After descending from the volcano with their faces plastered by its holy mud, the pilgrims will proceed to the main Hinglaj temple in the foothills of Kirthar mountains about 35km away.

The annual pilgrimage takes place every April in Hingol about 250km west of Karachi, from where the majority of people are coming. But most of them actually started out in Tharparkar. The most devoted are on foot – some coming from as far as Mithi and Umerkot about 550km away, taking 22 days to reach their destination. Others have hired cars and coasters. Built in 2007, the Makran Coastal Highway between Karachi and Gwadar has helped reduce the journey for many by days.

Veersi Malke Dewani, the general-secretary of Hinglaj Mata Welfare Trust, which has been organising the festival for the past 31 years, believes people from all over the world want to perform the pilgrimage but logistical problems keep them away.

The shrine that attracts thousands of tourists throughout the year is declared out of bound for Muslims for the festival. Considering the recent bomb blast in Lahore on Easter Sunday, the security at the temple is unusual.

Balochistan Frontier Corps personnel guard the entrance route at three check-posts, checking the identity cards of all arriving pilgrims. Muslims are turned away if not accompanied by the pilgrimage organisers themselves. This has not been the case. For years, Muslims have come to the yatra with some even terming it “Nani Ka Hajj”. Locals still volunteer for safe parking of vehicles and arrange potable water and food for pilgrims throughout the festival.

Sanjesh Dhanja, who runs the nonprofit Pakistan Hindu Seva, has taken up the responsibility of ensuring cleanliness at the site. This year, he has started an awareness campaign to educate the pilgrims not to create a mess and keep the temple clean.

Despite security concerns, Sanjesh says this year has seen the largest attendance of devotees, roughly estimated to be around 250,000.

Veersi says about 75,000 people were present on the second day alone — considerably larger in number than last year.

On the way inside, the scene turns as eclectic as any Urs celebrations of Sufi saints across Pakistan. Buntings, red flags and welcoming banners adorn the place. Revellers dance to music. Some watch from the sidelines, some nap under the trees while many continue to walk towards the main temple.

It is no surprise Thari women – easily recognised by their arms full of bangles and colourful dresses – are in majority at the Mata Hinglaj shrine. The estimated population of Hindus in Pakistan is over three million and most of them live in Tharparkar.

The festivities go on for four days but only the faithful stay put. Most people arrive and leave of their own will. On the third day, pandits sing hymns and mantras to please gods for accepting the offerings of the devotees.

According to Hindu beliefs, Sati, the spouse of Shiva, burnt herself to death after her father Daksha disrespected her and did not invite her partner to a feast. This angered Shiva who went on a rampage in the world carrying along with him Sati’s body. Vishnu then intervened and used his powers to calm Shiva down. He then cut the body of Sati into 51 pieces, which fell to earth in different places.

Giyan Maharaj, a pandit in Khipro, says these 51 places are called Shakti Peethas and became sacred places. Hindus believe the head of the goddess fell in Hinglaj, thus making it the most revered place of pilgrimage.

Trip of a lifetime

All believers, Giyan says, have to go to Hinglaj, which is built in a cave along the bank of River Hingol. This trip along with good deeds elevates the soul, which eventually escapes the birth cycle and reaches god. The soul is then ready for reincarnation inside a new body.

Veersi of the Hinglaj organising committee says most Hindus have come to know about this holy place only recently since the advent of social media. “If visa conditions in coming to Pakistan are relaxed, thousands of Hindus from across the world will come to the place,” he says.

For most Hindus, he adds, visiting Hinglaj is the ultimate pilgrimage.