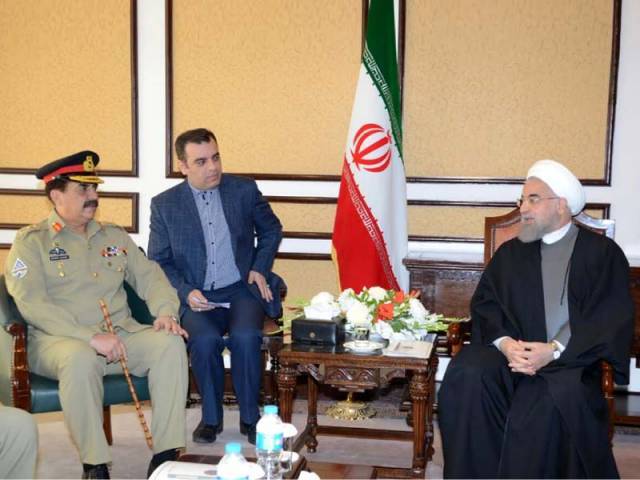 Pakistan’s military said on Saturday that the involvement of India’s top spy agency in stoking violence in Balochistan was discussed in a meeting between Chief of Army Staff General Raheel Sharif and Iranian President Hassan Rowhani.

“There is one concern that RAW (Research and Analysis Wing, India’s top intelligence agency) is involved in Pakistan, especially in Balochistan,” Lt-Gen Asim Salim Bajwa, the director general of the Inter Services Public Relations (ISPR), wrote on the microblogging site Twitter, quoting from the ‘text of COAS’s conversation’ with the Iranian leader.

“Sometimes [RAW] also uses the soil of our brother country, Iran. I request they should be told to stop these activities and allow Pakistan to achieve stability,” he further quoted the army chief as saying in the meeting.

Lt-Gen Bajwa’s fresh tweets came minutes after President Rowhani said at a news conference that the issue of RAW’s involvement in Pakistan was not discussed in his meetings with the Pakistani leadership.

“Today, we did not talk about it, rather we talked about how to expand [bilateral] ties,” Rowhani said when asked if the issue of India’s involvement in Pakistan was discussed in his interactions with the Pakistani leaders.

“Whenever Iran and Pakistan try to come close and intimate, some quarters create such rumours. We have heard about this issue some 20 times in the past. We have good ties with both India and Pakistan,” he added.

Earlier in the day, the chief military spokesman tweeted that President Rowhani met the army chief to discuss matters of importance. Gen Raheel discussed with the Iranian leader the issue of RAW’s involvement in Pakistan’s internal affairs, especially in Balochistan, he said.

President Rowhani also appreciated the achievements of Pakistan Army in the continuing offensive against militants in Fata, Operation Zarb-e-Azb, according to Lt-Gen Bajwa. “Matters of regional security, Pakistan-Iran relations, border security and connectivity were discussed during the meeting,” he said.

A RAW agent, identified as Kul Bhushan Yadav, was arrested in a raid near the Pak-Afghan border town of Chaman, in Balochistan, on Thursday, according to the provincial home minister, Sarfaraz Bugti. He said Yadav was Commander in the Indian Navy. “He was in contact with Baloch separatists and terrorists fuelling sectarian violence in Pakistan and Balochistan,” Bugti said.

“Through a demarche the foreign secretary conveyed Pakistan’s protest and deep concern on the illegal entry into Pakistan by a RAW officer and his involvement in subversive activities in Balochistan and Karachi,” said a brief statement issued by the Foreign Office spokesperson.

New Delhi accepted Yadav had served the Indian Navy, but dismissed the allegations of espionage. Indian External Affairs Ministry spokesperson said the detained individual “has no link with [the] government since his premature retirement from the Indian Navy.”