As political pressure builds, KESC agrees to hold off

As political pressure builds, KESC agrees to hold off 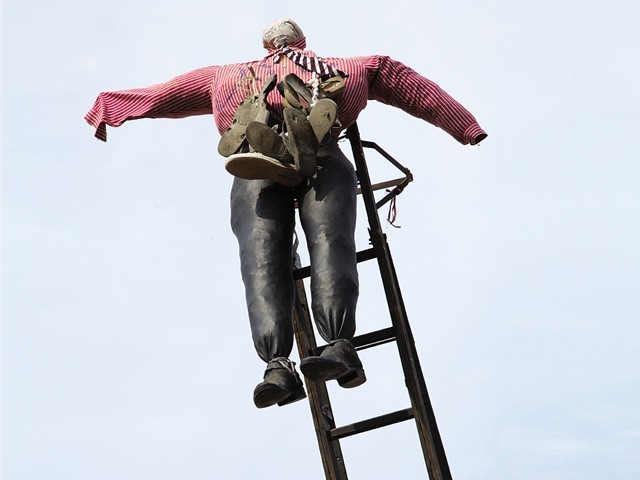 Protesters mounted an effigy of KESC and continued their demonstration on Friday. They all blamed the management for being sacked. PHOTO: NEFER SEHGAL/EXPRESS

KARACHI: The Karachi Electricity Supply Company (KESC) came under political pressure on Friday and agreed to not implement its decision to sack 4,300 workers after a meeting with the governor.

As the protest continued outside the Gizri office for the second day, Governor Ishratul Ebad Khan, Muttahida Qaumi Movement deputy convener Dr Farooq Sattar and KESC CEO Tabish Gauhar met at the Governor House. Labour union leaders said, however, that while they had received word about this development, they would not end the protest until their got it in writing. The Sindh government has formed an eight-member committee to present recommendations in three days.

Earlier in the day, it was a union leader’s dream come true. And indeed, Ayaz Mengal, who heads the Peoples Workers Union, was among the many unionists in full form, on the second day of the protest.

Into the microphone poured forth his scorn, mimicking the wives of employees who can’t understand why they make such little pay. “Their offer was neither golden nor was it a handshake!” he cried, referring to the scheme KESC offered the staffers before letting them go.

It was a veritable party out on the grassy slopes off Sunset Boulevard outside the Gizri office where groups of men broke out into impromptu dancing from time to time. Most of them had spent the night there. “No one arranged for food though,” one protester grumbled. The twiggy bushes that had survived the crush of humanity were decorated with orange peels and plastic bags.

Policemen stood guard at the entrance while some lazed at the roundabouts. Despite the evident tiredness of the protesters who stayed there overnight, the mood was belligerent, defiant and defensive. “If we had been behind the violence,” one disgruntled man said, “we would have torn the entire place apart. KESC brought in their own people who set the car on fire. We have footage.” While unionists denied that the workers had been involved in the violence, many KESC employees openly said their friends were involved. “Firing workers is like inviting your own death,” raged one protester, who had worked as a driver.

For its part, the company lodged an FIR (No. 30/2011) at Defence police station against hundreds of men under sections for looting, arson, attempt to murder, death threats, damage to property and injuring people. KESC nominated Ikhlaq, the CBA chairman of the labour union, Aslam Samo of the Peoples Workers Union, Asad Arbab Kesuty, Haji Shehzad, Aziz, Rajmir, Usman Baloch among others.

KESC’s staff has not been able to return to the office or properly estimate the damage. At least 150 cars were damaged and three were burnt, said spokesman Aamir Abbasi via email to The Express Tribune while listing the initial assessments. “All windows and doors [were] broken. Mental trauma for the employees is another story.”

According to him, their employees were mugged on Friday at other offices. “Frankly speaking, we were at the mercy of goondas, [the] law enforcers stood [on the sidelines],” he said. They have moved to an undisclosed location but staffers doing routine work were harrassed.

“Around 200 [men and women] were stranded inside, including myself,” said Abbasi. “Something we will never forget. Glass pieces were all over the place. [I] really felt for girls, as they were the most scared.”

When asked about the potential savings with the exit of these 4,500 workers, Abbasi replied that it was not just the saving, but more to do with the focus. “We want to focus on generation, transmission and distribution which are our core functions,” he said. “One has to recognise the fact that we are an engineering-based company and the strength of our human resource base should revolve around that. All other functions should be outsourced.”

KESC always knew that making such a huge change would be a “tall order”. “Bringing change to society or to a corporation is always difficult in any part of the world,” said Abbasi. “In Pakistan it is 10 times more difficult.”

Indeed, the real challenge lies ahead. “If you sack 4,000 people, what do you expect will happen?” said one woman who had worked there for over 20 years. Others said the allegations were false. “Why would we attack a building we work for?”

Protesters hinted at shutting down the power supply to the city if their demands were not met. “We put up these wires. We know how to take them down too,” said a man in his 30s.

Boys selling slices of coconut wove among the protesters, who have also amassed on the manicured slope in front of the building, in addition to occupying the road and the pavements. Several were perched atop KESC trucks.

The din of the angry speeches, rousing slogans and chants, was added to by “Jazba-e-Junoon” blaring from loudspeakers. The hit Junoon song was the anthem of the day, playing at intervals while the protesters broke out into jigs and hundreds clapped in tune to the music.

Resentment ran high, evident from the defaced walls of the building and reports that at least two people had to be rushed to the hospital for fainting. Men discussed their predicament between chewing paan and yelling out to those standing to sit down so they could get a better view.

The women protesters, on the other hand, sat in a huddle drinking tea. “We spent the night at our homes but came back today,” one said. “We will continue to come until they rehire us.”

Fiery speeches by union leaders and politicians dominated the morning. Pakistan Peoples Party’s Shazia Marri closed her speech with, “We will go speak to KESC and present your demands and we will not sell you out!” which was followed by resounding cheers of ‘Jiye Bhutto’.

Scorn was heaped upon KESC executives. “They sit at their laptops all day, playing games and drinking tea, and earn hundreds of thousands of rupees,” one protester alleged. “They want to kick us out of our jobs — we make Rs15,000 to Rs20,000 — and hire these overpaid people instead.”

“Today is a Friday,” mused one man. “It’s a blessed day, maybe our demands will be met.”

With additional reporting by Irfan Aligi

Devolution problems: ‘New laws are causing a lot of confusion at hospitals’