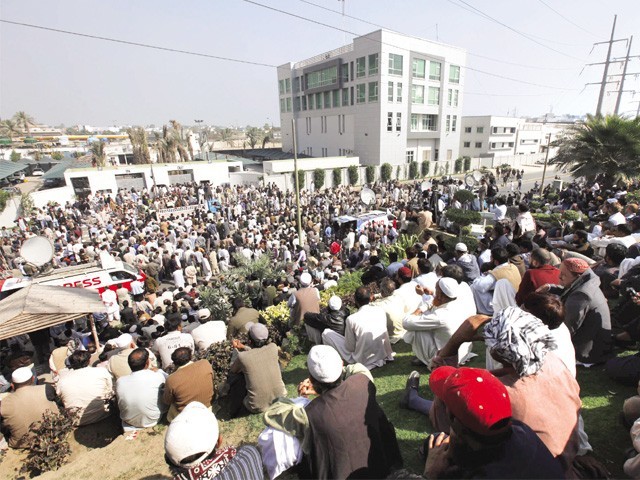 Hundreds of sacked employees of a Karachi Electric Supply Company (KESC) shout slogans outside the KESC office. The utility purged more than 4,000 of its employees as a rightsizing move, which caused violent protests as they chanted slogans against the management and demanded an immediate withdrawal of the decision. PHOTO: ATHAR KHAN/EXPRESS

KARACHI: A nightmare unfolded for Karachi’s electricity supply company on Thursday barely hours after it sacked over 4,000 workers. Hundreds of them showed up fuming at its Gizri headquarters, attacked the building, burnt cars and damaged several others.

The mayhem broke loose at about 11 am when the protesters pelted the building with stones, breaking its glass, setting at least two cars ablaze and damaging 113 others after looting them. By 1 pm labour union leaders had started giving speeches.

Some attempt was made to protect the building as security guards had concealed the entrances. By the time the protesters were done, office papers and documents were scattered around the main premises. The workers used a nearby building as a toilet and trade unionists arranged rugs for them so they could sit and protest.

In a press release, the Karachi Electric Supply Company (KESC) said that “hundreds of goonda elements” forced their way into the office buildings. “They captured employees inside as their hostages and physically attacked the top management officials on duty,” it said. “[They] ransacked equipment and property and torched the vehicles.”

Frantic phone calls were made to the police and other law-enforcement agencies. But according to KESC, “they stood there watching the scene as silent spectators and did not act even after hours of the start of the attack”. While talking to The Express Tribune, a well-placed KESC official, who did not want to give his name, said they had received serious threats from the agitators. Some threats were made that load dispatch centres would be attacked, which could affect the entire supply system.

The situation turned ugly when some trade union leaders claimed that KESC itself had “planted agitators” amidst the lines of “peacefully protesting” workers. Akhlaque Ahmed and Lateef Mughal said that KESC wanted to “defame” them as “law breakers”. At the protest, leaders of the trade unions said that they would not go home until the retrenchment orders were withdrawn.

A KESC official said that they would “100 per cent” register criminal cases.

For their part, the Peoples Workers Union said that they would move the high court on Friday against the retrenchments. The labour union (CBA) said that they were already in court about the matter.

KESC has maintained that the move was “unavoidable”. Its performance had been badly compromised. It had announced a Voluntary Separation Scheme (VSS) to 4,500 of its non-management staff and workmen engaged in non-core functions, such as drivers, office attendants, security guards, sanitary workers, etc. Prior to the recent retrenchments, there were 17,000 employees, said a KESC official, adding that a majority of them had failed to perform properly. Some of them were drawing high salaries, up to Rs50,000 for just being drivers.

When The Express Tribune tried to interview the protesters they declined to give their names. Some of them said they were not sacked, but were there to support the protesters. KESC CEO Tabish Gauhar issued a late-night statement saying that he condemned the agitation by the labour union (CBA) and their destruction of KESC’s property. KESC welcomed Muttahida Qaumi Movement chief Altaf Hussein’s appeal for a peaceful resolution of the issue through negotiations.

KESC has engaged with MQM deputy convener Dr Farooq Sattar. Speaking at a press conference at the Karachi Press Club, the United Workers Front’s Nabeel Ahmed Khan said that on December 31, KESC had introduced its scheme but the workers had not found it attractive. He called the protest and the damage done “a natural process” given that 4,500 workers were “forced” out.