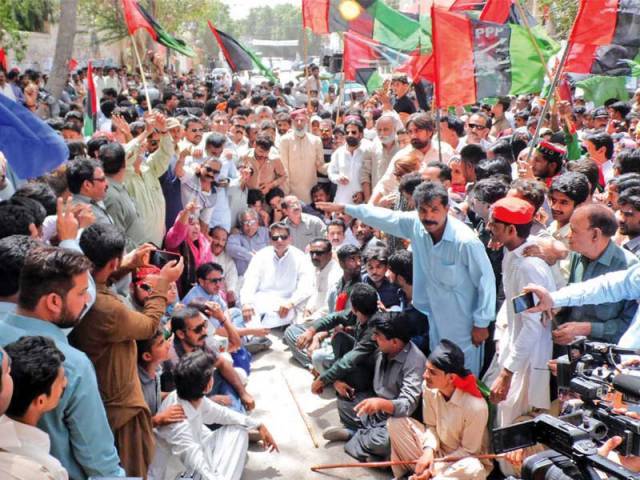 The participants condemned the government’s decision of letting former president General (retd) Pervez Musharraf, who is facing court cases, fly out of Pakistan.

“The central government is implicating the judiciary for the decision of allowing Musharraf who was involved in the serious crime of violating the Constitution to go out of the country,” said Sindh information adviser Maula Bux Chandio, who led a rally in Hyderabad. “It [the implication] is contemptuous for a constitutional institution [such as the judiciary].”

Musharraf is facing trial under article 6 of the Constitution besides the assassination cases of PPP chairperson and former prime minister Benazir Bhutto, Bugti tribe leader Akbar Bugti and the Lal Masjid case.

Chandio blamed the PML-N government of removing foreign travel restrictions on Musharraf. He asserted that the central government’s decision reflects disregard for democratic values. “It seems the honeymoon period of the Nawaz government is over now,” said Chandio. “It was earlier powerless and now it has become restless.”

He argued that this development will weaken democracy, adding that the PPP cannot support a political party whose actions undermine democratic dispensation. The other leaders who addressed the rally termed the PML-N government’s move ‘cowardly’.

“It’s a big setback for democracy and the rule of law,” said Zahid Bhurgari, former provincial minister and Hyderabad president of the PPP.

In Jamshoro district, PPP senator Aajiz Dhamrah, who led the rally, alleged that the PML-N government has given a safe exit to Musharraf under a deal. The rallies were also held in Mirpurkhas, Tharparkar, Dadu, Nawabshah and other districts.

Meanwhile, PPP leaders in Karachi also criticised statements made by PML-N ministers and leaders in which they pardoned the former president. Their statements are in fact are far bigger sin than the sin itself, said a statement issued on Saturday by party leaders Ijaz Jakhrani, Shahida Rehmani, Nawab Wassan and Noman Shaikh. Under what law and constitutional powers can Prime Minister Nawaz Sharif pardon Musharraf, said the statement. “These PML-N leaders had been drumming up charges against Musharraf for breaking the Constitution and committing treason against Pakistan, it added. If one believes their allegations, then the nation needs an explanation on how the prime minister gave pardon to a ‘traitor’.”

The PPP MNAs said these statements exposed the contradictions of the PML-N government as the interior minister insisted that Musharraf has promised to return within two weeks while other party leaders are talking about providing amnesty to him.