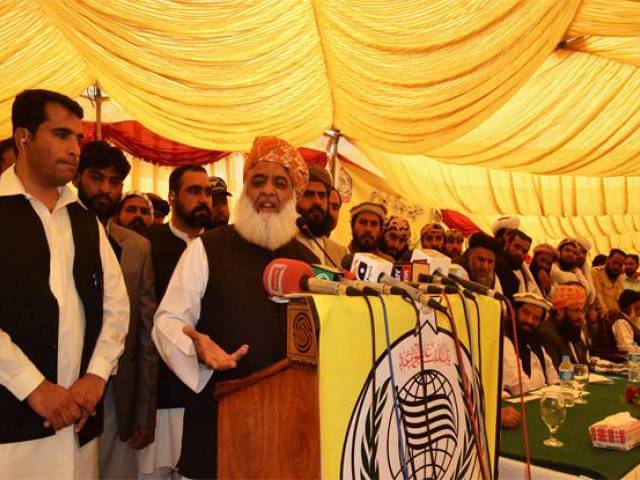 QUETTA: Maulana Fazlur Rehman showered ridicule at the Punjab Assembly for passing the women protection bill on Friday. He was speaking at a Jamiat Ulema-e-Islam – Fazl (JUI-F) party gathering at a local hotel in Quetta. Punjab Assembly had passed the Punjab Protection of Women against Violence Bill on Wednesday which provides protection and legal recourse to victims of domestic violence.

He mocked the Punjab government saying that they did not need to present such a lengthy bill in the assembly and should have rather acted on his ‘two word’ suggestion calling the ‘husband as wife and wife as husband’. He said that he had not read the women protection law passed by the provincial assembly.

When the clergy cries ‘conspiracy!’

He said that a similar bill was proposed during the Musharraf era but the ruling party had opposed it proving that their earlier disagreement was due to a struggle for power and was not based on principles.

He said that un-Islamic laws were being passed under the 99 names of Allah written in the parliament. Nations who turned their faces away from the blessings of Allah the Almighty have always incurred His wrath, he added.

The attitude of the rulers in the country evidently shows that they have vowed not to make Islamic legislation, Fazl stated, adding that JUI is a movement and an ideology which has been around for a 100 years and its leadership is still determined to lead the country in the right direction.