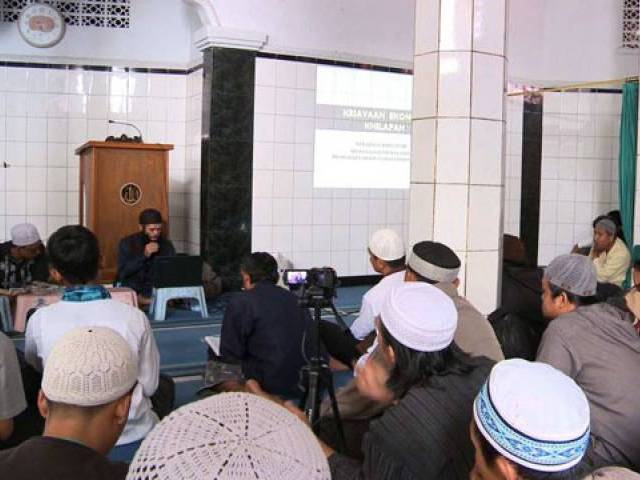 The four, who included a 15-year-old boy, were arrested Sunday in the city-state when officials became suspicious after checking their documents and finding one of them had previously spent time in Syria, Indonesian police said.

Authorities deported them to Batam, an Indonesian island not far from Singapore, the same day, and they have since been sent on to Jakarta.

“Four Indonesians were deported to Indonesia after investigations revealed that they had plans to make their way to Syria to fight for ISIS,” a spokesman for Singapore’s ministry of home affairs said, using an alternative name for Islamic State.

“Singapore authorities informed their Indonesian counterparts before the deportation.”

After questioning the men, all from the main island of Java, Indonesian officials also concluded that the group were likely heading to Syria, Indonesian police said.

Islamic State has provided a potent new rallying cry for Islamic extremists in Indonesia, the world’s most populous Muslim-majority country, with hundreds believed to have headed to fight in the Middle East with the extremists.

National police chief Badrodin Haiti said the detained men were also thought to be followers of radical preacher Aman Abdurrahman, who is in jail for his role in forming a militant training camp, and has pledged allegiance to Islamic State.

There have been suspicions Abdurrahman may have helped plan last month’s gun and suicide attacks in Jakarta that left four attackers and four civilians dead.

They were claimed by Islamic State, which controls vast swathes of territory in Syria and Iraq, and were the first major attack in Indonesia for seven years.

They were detained as they returned to Singapore, where they planned to catch flights, he added, without giving further details.

Indonesian police have launched a nationwide crackdown since the Jakarta attacks, rounding up dozens of alleged Islamic extremists.

Indonesia suffered several major bomb attacks by Islamic radicals between 2000 and 2009, but a subsequent crackdown weakened the most dangerous networks.

Pat Conroy, author of ‘Prince of Tides’, dies at 70