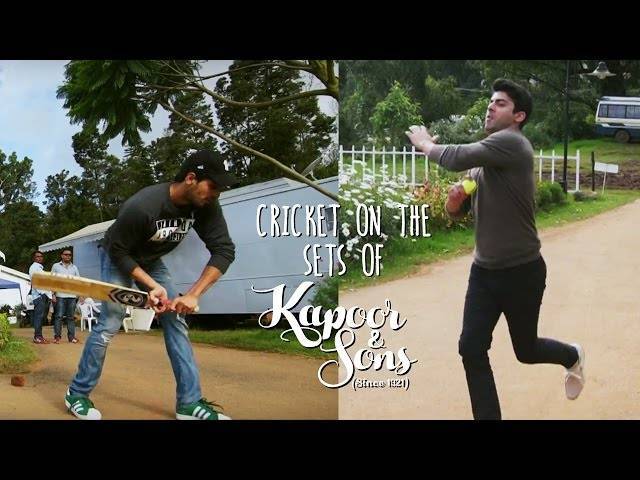 Pakistani heartthrob and his 'Kapoor & Sons' costar Sidharth take to the field to show their cricket prowess. PHOTO: YOUTUBE

Cricket is not a sport Indians and Pakistanis take lightly and Fawad Khan and his Kapoor & Sons co-star Sidharth Malhotra have proven just that.

In a behind-the-scenes video released by makers of Kapoor & Sons, the Pakistani heartthrob and Bollywood actor Sidharth Malhotra can be seen proving their prowess on the cricket field.

In case you are wondering why they were playing cricket instead of shooting, Sidharth in the video reveals, “This crew has played more cricket and worked less on the shoot.”

The video features an India vs Pakistan cricket Test match with  Fawad and Sidharth on opposing sides. But unlike actual matches, these two enjoy their time, having a ball on the field.

“My team was always better, we won a lot of championships,” boasts Sid as Fawad scoffs in the background.

“Do you guys have a hole in your hands? God gave you two hands,” asks Fawad as his team player drops a catch.

The best part about the match has to be Fawad’s enthusiasm and passion as he played. Never have we truly seen the actor all fired up in front of the camera.

And fans loved it!

@S1dharthM @_fawadakhan_ you and fawad made me remember my school/college days when I was playing cricket, so childish it was.

WAOW MAZZA AGAYA Fawad is so hyper whn it comes to cricket nd knows everything about it! PAKISTAN KE HAI BHAEEE @_fawadakhan_

Fawad during the cricket match:

@_fawadakhan_ Fawad u r multi talented… Never knew that u can play cricket so well….

FAWAD AND SID PLAYING CRICKET OMG THESE TWO ARE #KapoorAndSons

During cricket:
Fawad gets stressed.
Sid cries when he gets out.
Fawad uses a measuring tape to check if its out or not.#KapoorAndSons