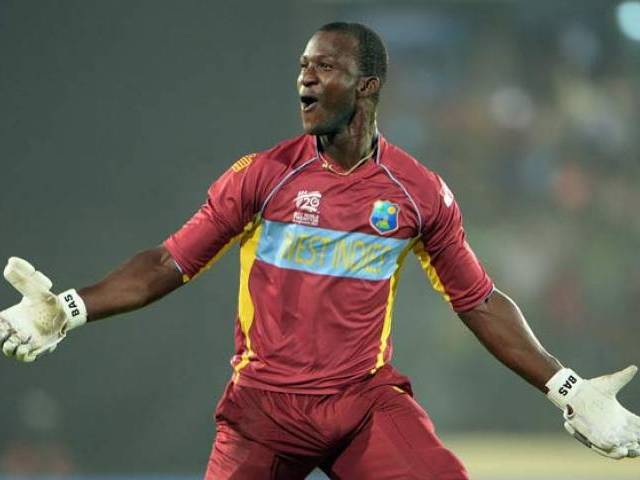 Pakistan Super League (PSL) is just a few days away from turning into reality and West Indian all-rounder Darren Sammy, who will be playing under Shahid Afridi for Peshwar Zalmi, is ready to rock the event with his blistering performances.

On a lighter note, Sammy has said he has started to learn Pashto language and Afridi was left impressed by his speaking abilities.

“I’m looking forward to playing for Peshawar and my Pashto is improving,” said Sammy. “Shahid Afridi saw my video and said he was shocked to see me speaking Pashto. It’s all part of the fun of mingling with people from different cultures and playing around the world.”

The 32-year-old said he was looking forward to participate in the PSL as the T20 format was taking the world by storm.

“You bet I am [looking forward to participate in PSL],” he said. “Every nation has its twenty over tournament and you cannot ignore the fact that this format is taking the world by storm. Look at the Big Bash, 80,000 people turning up for a match in that tournament and 40,000 people at the stadium in Perth to watch another Big Bash match yet barely 20,000 attended a Test match involving Australia and India.

BCB to stop Mustafizur from participating in PSL

The five-team format of the PSL allowed each team to select one Iconic player, three players each from Platinum, Diamond and Silver category while five players from the Emerging category. Sammy said he was looking forward to playing with the young Pakistan talent apart from the superstars of the format like Afridi, Wahab Riaz and Kamran Akmal.

PSL vs IPL: In numbers

“Look at India and the IPL and how that started. It’s about good international players mixing with local talent which creates an opportunity for learning,” said Sammy. “You have youngsters rubbing shoulders with international players and that gives them the chance to learn and improve their game.

“I’m not only looking forward to playing alongside Afridi, Wahab and Kamran, but also playing alongside the local talent that will be in the squad and you can only get that when you play in these sorts of tournaments. There is an opportunity for me to learn as well as passing on some of my experience and knowledge to the local players and youngsters.”

Darren Sammy was interviewed by PakPassion