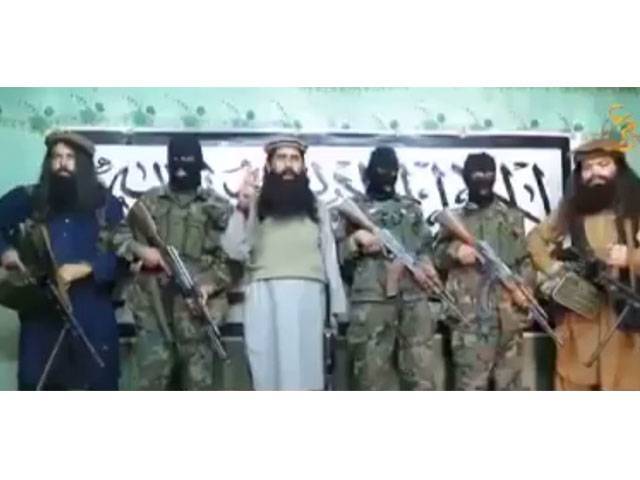 This still image taken from a video released by a faction within the Pakistani Taliban on January 22, 2016 shows their leader Khalifa Umar Mansoor (C) with militants delivering a statement from an undisclosed location.

ISLAMABAD: The Taliban faction behind the Bacha Khan University massacre in Charsadda this week issued a video message Friday vowing to target schools throughout the country, calling them “nurseries” for people who challenge Allah’s law.

The video, which spread rapidly on Facebook but was not released on official media accounts for the Tehreek-e-Taliban Pakistani (TTP), shows Khalifa Umar Mansoor, whose faction claimed responsibility for the attack on the university Wednesday.

Heavily armed gunmen stormed the campus in Charsadda, killing 21 people in an attack that had chilling echoes of a 2014 assault on the Army Public School in nearby Peshawar, also claimed by Mansoor’s faction.

The rampage threatened to shatter the sense of security growing in the troubled region a year after the Peshawar attack, which left more than 150 people dead — mostly children.

Instead of targeting armed soldiers, he said, “we will target the nurseries that produce these people”.

“We will continue to attack schools, colleges and universities across Pakistan as these are the foundations that produce apostates. We will target and demolish the foundations,” he said.

Mansoor issued a similar video in the wake of the Peshawar attack on December 16, 2014, Pakistan’s deadliest ever extremist assault.

He said schools like the one in Peshawar, which is some 50 kilometres from Charsadda, were “preparing those generals, brigadiers and majors who killed and arrested so many fighters”.

“If our women and children died as martyrs your children will not escape. If you attack us we will take revenge for the innocents,” he said in the video message, also posted online.

Analysts have said the Taliban sent a message of impunity with Wednesday’s attack, that a national crackdown on extremism has failed and they can hit targets at will.

The TTP, an umbrella group, has officially disavowed the Bacha Khan attack, branding it “un-Islamic” and vowing to hunt down those behind it.