Biden’s Pakistan trip: US tones down demand for Waziristan offensive

Biden’s Pakistan trip: US tones down demand for Waziristan offensive 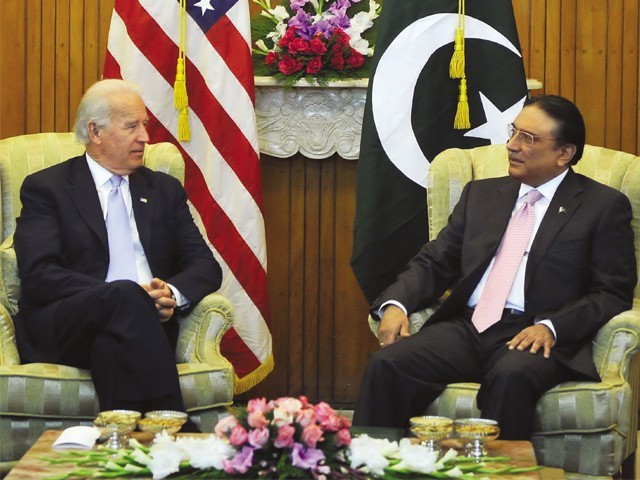 ISLAMABAD: Pakistan and the United States have covered ‘significant ground’ to iron out their differences for Afghanistan’s future after Washington apparently toned down its demand for a full-scale military offensive in the North Waziristan tribal region.

A meeting between US Vice President Joe Biden and Army chief Gen Ashfaq Parvez Kayani was described by a senior security official as “very positive and constructive.”

“Both countries have narrowed down their differences on certain issues that haunted them in the past,” the official told The Express Tribune on condition of anonymity.

Biden, on a daylong trip to Islamabad, held talks with top political and military leadership. Earlier, he toured Afghanistan to reassure that the US forces will remain in the war-torn country beyond the 2014 pullout deadline, if Kabul wants them to.

His visit came as the war in Afghanistan enters a decisive phase and the Obama administration is pushing Pakistan to do more to eliminate al Qaeda ‘safe havens’ from the tribal belt.

“The Americans now understand our position on North Waziristan – they are no longer pushing us,” the security official said, adding that Biden had offered additional economic and military assistance to Pakistan.

“The meeting between Kayani and Biden was very fruitful,” said another military official privy to the matter.

A statement issued by the  Inter-Service Public Relations said little about the meeting between the vice president and the army chief. “The visiting dignitary remained with him for some time and discussed matters of mutual interest,” said the brief statement. The US embassy spokesperson also declined to comment.

Earlier, at a joint news conference with Prime Minister Yousaf Raza Gilani, Biden attempted to dispel misperceptions in Pakistan about America’s role in the region.

“There are some sections in Pakistani society that suggest America disrespects Islam and its followers,” Biden told reporters. “We are not the enemies of Islam and we embrace those who practice this great religion in our country,” said Biden, adding that Pakistan and the US were facing a common enemy, ie the militancy threat to both the countries.

“They (al Qaeda) continue to plot attacks against the United States and our interests to this very day,” he insisted.

Terming his discussions with the Pakistani leadership as ‘extremely useful,’ Biden underlined the need for a strong partnership between Pakistan and the US.

“We know that there are those – I am not talking about leadership, I am talking about the public discourse – (who believe) that in America’s fight against al Qaeda, we’ve imposed a war upon Pakistan,” he remarked.

Meanwhile, Premier Gilani said high-level consultations between the two countries were necessary to attain “our shared goals.” The prime minister informed Biden about his recent meeting with Afghan President Hamid Karzai and said Pakistan will continue to pursue its policy of non-intervention and of respecting the sovereignty and territorial integrity of Afghanistan. He added that Pakistan hopes “there will be no new great game” pertaining to Afghanistan and said that it does not expect any country to indulge in any proxy war or measures that have an impact on Pakistan or Afghanistan’s sovereignty. Gilani also rejected the US assertion that certain elements were operating from areas along the Pak-Afghan border.

In his meeting with Biden, President Asif Ali Zardari called for a close, stable, long-term and broad-based relationship between Pakistan and the United States for promoting peace, stability and progress in the region and beyond.

He also said that Pakistan was committed to fight terrorism and underlined the need for support and understanding of the international community in this effort.

Presidential spokesperson Farhatullah Babar quoted the president as saying that drone attacks undermined the national consensus against the war on militancy, adding that the president reiterated Pakistan’s call for transfer of drone technology for use by its own security forces against the militants.

Zardari also sought increased market access to the US and called upon them to create a special category for conflict-affected countries under its GSP Plus programme.

Appreciating Pakistan’s fight against militants, Biden reiterated US support to Pakistan, assuring that the new US administration would support Pakistan’s efforts to strengthen democracy, countering terrorism and in meeting its developmental needs and capacity building.

While condemning Salmaan Taseer’s assassination, Biden said the United States was “saddened by the cold-blooded murder of a decent, brave man.” “The governor was killed simply because he was a voice of tolerance and understanding,” he said.

Earlier, Biden telephoned Amna Taseer, the widow of the slain governor, to express his condolences on behalf of the president and the American people.