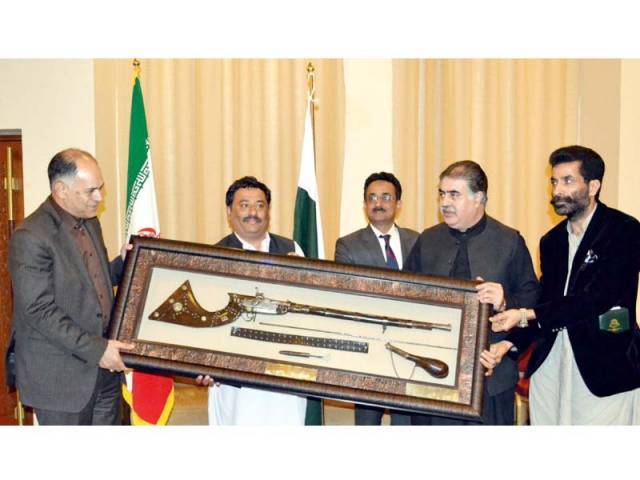 Gwadar and Chabahar will be made ‘sister port cities’, and railway track will be laid between them on priority,  Balochistan Chief Minister Nawab Sanaullah Zehri said in a meeting with Ali Osat Hashemi, the governor of the Iranian province of Sistan-Baluchestan, on Monday.

“The Chabahar-Gwadar Memorandum of Understanding will be implemented soon,” Zehri said. The plans for a border trade line, a new shipping lane and Iran-Gwadar flights would also be materialised, he added. “We have already formed a joint border monitoring committee in order to prevent human trafficking and drug smuggling.”

Governor Hashemi was heading an Iranian delegation and the meeting took place in Gwadar.

It was decided that Iran, which already provides 70MW electricity to Makran, would increase the supply by 30MW. Moreover, another 1,000MW would be supplied by Tehran to Pakistan’s national grid. Zehri said he would soon make a reciprocal visit to Sistan-Baluchestan.

The chief minister said Iran and Pakistan are brotherly countries, having historical, cultural and religious ties. “Ethnic Balochs living on both sides enjoy the same language, civilisation and culture,” he added.

Separately, various delegations called on Chief Minister Zehri in Gwadar and apprised him of the issues faced by the people of Gwadar city. “My administration is aware of the chronic problem of water scarcity in Gwadar and we are taking practical steps to address this serious issue,” he said. He assured them that work on Sodh and Shadikor dams would be completed soon.

Chief Minister Zehri said the China-Pakistan Economic Corridor would not only bring about economic prosperity for the people of Balochistan but Central Asian countries would also reap the benefits of this multibillion-dollar project. He reassured the people of Gwadar that they would be given priority in all development projects related to CPEC.