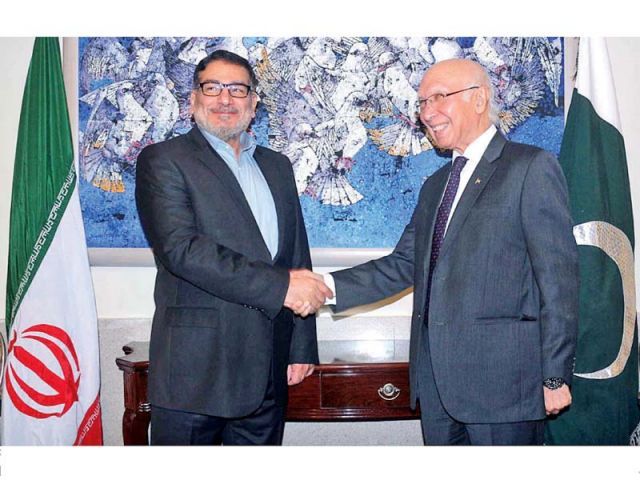 Ali Shamkhani and Sartaj Aziz shake hands prior to their meeting at the Foreign Office. PHOTO: APP

Expressing its willingness for enhanced bilateral security and economic cooperation with Pakistan, Iran has dismissed suggestions that it is developing the Chabahar port to undermine the Gwadar deep seaport in Balochistan.

“There has been talk that Chabahar and Gwadar ports will compete with each other. This is not true. Iran considers this as a matter of cooperation not competition,” said a top Iranian security official at a joint news conference with Prime Minister’s Adviser on National Security and Foreign Affairs Sartaj Aziz on Wednesday.

The statement by Ali Shamkhani, Secretary of Iran’s Supreme National Security Council, came amid reports that India is attempting to use the Chabahar port to compete with Gwadar. The strategic Chabahar port in southeastern Iran is central to New Delhi’s efforts to circumvent arch-nemesis Pakistan and open up a route to landlocked Afghanistan where it has developed close security relations and economic interests.

The Gwadar port is seen as central to the China-Pakistan Economic Corridor (CPEC) that will connect the impoverished western region with Central Asia and the Middle East through a network of rail and road links passing through Pakistan. Earlier in August Iran’s Foreign Minister Javad Zarif had dismissed suggestions that Tehran was opposed to the CPEC project, saying it “supports growth and development anywhere in Pakistan”.

Shamkhani, an influential figure responsible for Iran’s defence and security policies, held wide-ranging talks with Sartaj Aziz. Aziz told the news conference that implementation of Iran’s nuclear agreement with world powers would open up new avenues of economic and trade opportunities for the two countries and contribute to promotion of peace, security and prosperity in the region and beyond.

After nuclear deal, Pakistan and Iran seek to increase trade

“Both sides noted that the security scenario in the region was evolving rapidly, and there was a need for the two countries to work together through better and closer coordination on tracking and controlling existing and emerging terrorist threats in the region,” he added.

The Iranian official said his country was ready to join hands with Pakistan to fight the threat posed by the Islamic State and other Takfiri terrorist groups.

Asked whether Iran would join the US alliance against IS, also known by its Arabic acronym Da’ish, Shamkhani said Tehran was ready to work with any country which was sincere in fighting the menace of terrorism. However, he added that Da’ish was created by certain countries to further their interests.

In reply to a question about the Russian air strikes in Syria, Aziz said Pakistan was assessing the situation as to whether Moscow’s move would lead to a political settlement. “Until then we reserve our judgment,” he added.

Shamkhani also praised Pakistan’s stance on Yemen. Despite intense pressure from its Gulf allies, Islamabad had refused to join the Saudi-led alliance against the Houthi rebels in Yemen earlier this year.

In replying to another question, the Iranian official said Tehran believed that resolution of the longstanding Kashmir dispute had to be found through political means. “Our position is very clear that there has to be a political settlement of the Kashmir issue in line with the wishes of Kashmiris,” Shamkhani emphasised.

Responding to a question about the anti-Muslim policies in India, the Iranian official made it clear that imposing a ban on cow slaughter and other means could not suppress Islam.

Shamkhani will meet Prime Minister Nawaz Sharif on Thursday and extend him an invitation for a summit of gas exporting countries scheduled to be held in Tehran in near future.