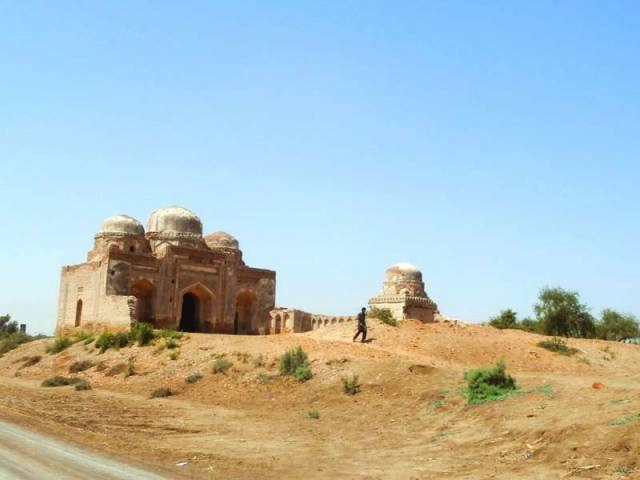 Hingorani Maariyon, an old site near Tando Fazal, nearly 20 kilometres from Hyderabad, Sindh, was built in a prosperous, agricultural town inhabited by the Hingorani Syeds in the 18th Century during the early years of the Kalhora rule in Sindh. Today, nearly three centuries later, parts of the structure still stand tall.

According to accounts published in the 1920 Gazetteer of Hyderabad, the site was attacked and destroyed by an Afghan invader, Madad Ali Khan, around 1775 AD. Three of its structures, however, have survived years of neglect and stand amongst the remains of the once flourishing city. The first structure is a mosque with three entrances built on a raised platform. It is accompanied by another smaller, domed structure with an open courtyard. This second component of the mosque served as a madrassa or seminary for students from remote areas to study theology and other subjects. The second structure is a tomb with a single entrance and dome. According to a local, the tomb is of one of the local rulers and is venerated even today by locals. The beautiful structure combines ornate stone carvings on the ceiling with arched and pointed niches, finished with floral and geometric patterns. Unfortunately, all the decorative elements are now in poor condition due to weathering and vandalism. Zahida Rehman Jatt is a lecturer at the department of Anthropology and Archaeology at the University of Sindh in Jamshoro.The third structure is also that of a mosque, though comparatively smaller. It stands on a raised podium, almost 30 feet high, with approximately 17 to 20 steep stairs leading to the main entrance. The lower level of walls is adorned with large, yellow stone slabs, and the structure is decorated with intricate floral designs, consisting of stars and zigzag patterns. In its original form, thick walls encircled the mosque but  they have collapsed over time.

Film review: Star Wars:The Force Awakens – Not a force to reckon with